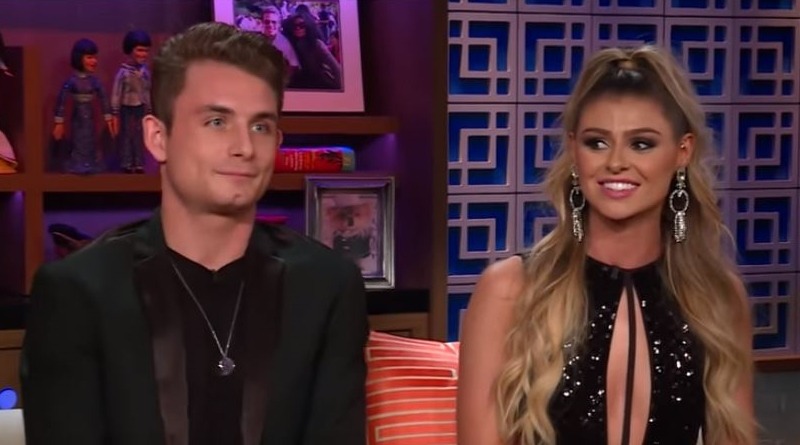 Vanderpump Rules‘ Jax Taylor and Brittany Cartwright tied the knot at the Kentucky Castle in Kentucky this weekend. Obviously, loads of their castmates attended, including Lisa Vanderpump. Fans of the Bravo show were thrilled to see she managed to get there after she returned from the UK. At one stage, it looked like the death of her mom Jean would prevent her attendance. But, one couple, may not have made it to the wedding. In fact, it looks like James Kennedy And Raquel Leviss did their own thing down in California.

James Kennedy and Raquel Leviss are an item, as fans of the show know. They can also recall that James and Brittany and Jax got into a major dispute more than once. In Vanderpump Rules Season7, most of the drama came after James Kennedy rapped about Jax Taylor’s cheating. The event at SUR also featured Brittany so she got upset. Plus, he and Katie Maloney-Schwartz got heated when he “fat-shamed” her.

Then at the season 7 reunion, James said that Brittany looks like a “disco ball” and criticized her home state as “hillbillies.” Brittany lost it and the F-word flew around big time. Plus, we saw James and Jax nearly get into a fight and Andy Cohen intervened. It made for great TV drama, but it’s unlikely James got an invite to the wedding.

Raquel Leviss would love to go to the wedding, James was evasive

According to Hollywood Life, James spoke to them at “the World Dog Day event benefiting Vanderpump Dogs on May 18, however, James wouldn’t spill on whether or not he and Raquel would be attending the nuptials. He simply teased, “You’ll have to wait and see!” Plus, Raquel said, “I love weddings and I love love, so, we’ll leave it at that.” However, it looks like no invite arrived for them.

Vanderpump Rules cast members at the wedding and the festivities that preceded it shared plenty of Instagram stories and posts about it. But none of those featured either James or Raquel. Perhaps they just lost in the crowd, you might ask? But, we know James. He loves his social media and no doubt we would have seen something from him about it.

Where were James and Raquelle this weekend?

Judging by an Instagram video that James shared, they probably hung out in Bel Air, Los Angeles. The DJ’s video showed an infinity pool and it looks way gorgeous! He tagged it as Bel Air. In one of his stories, he also shared part of the same scene, saying that it was one of the nicest days ever. That post came on Saturday, the day of the grand wedding event for Jax and Brittany.

Plus, Raquel shared a few photos on her Instagram over the past four days showing her in LA. Of course, Jax went over the top with pool parties and other entertainment over that same time period. So, no, it looks like James and Raquel of Vanderpump Rules never made it to the wedding in Kentucky. On her latest post, people asked why she never went to the wedding. However, so far, she gave no reply.

What do you think about James Kennedy and Raquel Leviss missing the wedding? Do you think its part of a storyline for a new season? Could Brittany and Jax hate on James so badly that they snubbed him? Sound off your thoughts in the comments below.