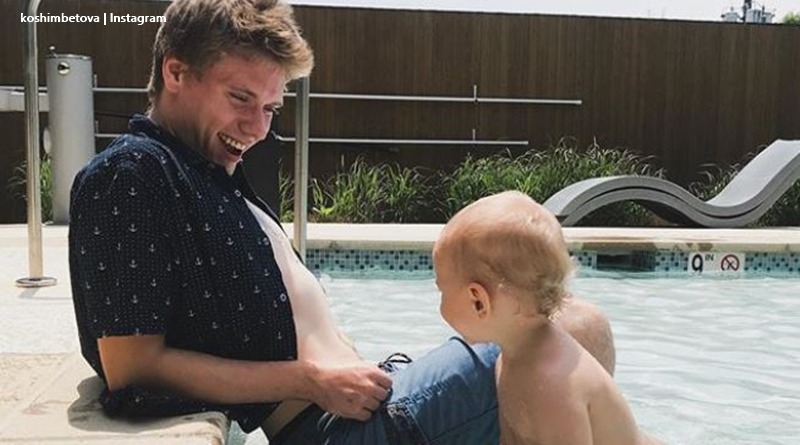 90 Day Fiance fans know that Steven Frend and Olga had a beautiful baby boy. Just recently, on Father Day, Olga shared a photo of little Alex standing in a pool with his dad. Fans immediately noticed how big he’s getting. So many people love how Steven’s getting it together with Olga and his little family. Certainly, he seems much more mature than when he saw him back in the last season of the TLC show. Now, He shared another photo of him and his boy enjoying themselves. However, haters parent-shamed him and fans stood up to defend him.

This week, Steven shared a photo of himself and Olga, saying how much he missed her when she was in Russia. That came when they celebrated their two-year relationship. Both still young, the couple look radiantly happy, and for fans who initially thought him a loser, it’s nice to see them out and about. They seem to love having fun with little Alex.

After a long silence from both of them on the status of Olga, they finally broke their silence. TV Shows Ace speculated they might be filming and under non-disclosure. Now they’re able to post up photos, some 90 Day Fiance followers look for reasons to shame them. Meanwhile, other fans try and defend the young couple from the worst of it.

Parent-shamed Steven gets fans defending him

The whole fuss about shaming Steven came from a photo he posted Saturday. Either this photo got filmed by TLC, or Olga took it. It shows Steven on a skateboard. No, he’s not doing any fancy flippy stuff. He’s holding Alex firmly and the little boy’s standing between his feet. (You can see the photo further down in this article). Someone got upset because neither of them wore a helmet. Chastised, Steven replied, saying that it was not a planned skateboarding outing, just an “unexpected” thing that happened.

Many 90 Day Fiance fans stood up for Steven, asking people to leave him alone enjoy his son. One person noted, “He’s holding on to him. Not like the baby is gonna just take off like a rocket. I have 4 kids and all are fine. Totally different if the boy was alone trying to skate.” Another fan agreed, saying, “I’m going to agree. It looks like it was a semi-staged shoot. Adorable as hell, and perfectly safe. @frendsteven you’re doing great, and the pics ended up being super cute.”

Super happy fans chip in their say to Steven

It seems these young 90 Day Fiance parents gained a lot of loving support from their fans. The nice comments kept coming after they told off the haters. One of them said, “Everyone saying put a helmet on… I’ve been here… A child who wants to explore the board unexpectedly and loving their excitement so snap a few pictures…I LOVE THIS… And he was right with him the WHOLE time, people relax… Xx Steven, GREAT moments with your son!!!! You guys are amazing!”

Another lovely message said, “Y’ALL LOOK SOOOOO HAPPY!!! I remember watching 90 [Day], Steven, and you were always talking about being a dad that you never had. How you wanted to be there for your son…I just cannot tell you what a blessing it truly us to see your words coming to life…as in these amazing & awesome pictures of you and your baby boy. And how wonderful that you’re here at home in the United States!!! You and your wife have come so far…the love y’all share, and the Loving Hand of God – is seeing you through. God Bless you and your family, Steven. May you continue to be of great…joy and prosper in all areas of your life & journey.”

That’s very nice and hopefully, Steven feels a bit better after all the support. What do you think about people parent-shaming Steven Frend? Do you think this was a dangerous situation? Would you defend him, or slam his parenting skills? Sound off your thoughts in the comments below.