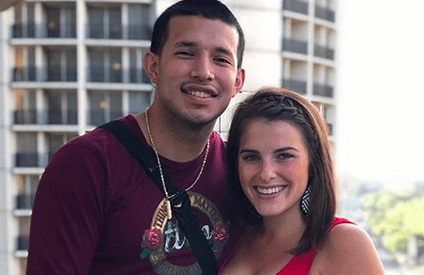 It’s an exciting time for one Teen Mom 2 star! Javi Marroquin shared on Tuesday that he had proposed to his girlfriend, Lauren Comeau.

On his Instagram account, Javi shared two pictures of the engagement. One is a selfie featuring himself and Lauren, who is showing off her new ring. The second picture is of the ring. In his caption, Javi talks about how much Lauren means to him and his family.

In the caption, he writes, “Our sleepless (mainly yours) nights… our endless laughs… and our countless jokes to each other now can be forever. Without you, our gym wouldn’t be possible. Without you we wouldn’t have a place to call home. Most importantly, without you, we wouldn’t be complete. Thank you for being the greatest mom to Eli and now (soon to be) stepmom to Lincoln. I feared not finding someone that would love me and linc the way you do. Never have I questioned that with you. Thank you for everything you do for this family. I can’t believe I’m this lucky.”

In response to his sweet post, Lauren left a funny comment and said, “Also! I can’t believe I’m lucky enough to annoy you for the rest of our lives!!! #prankwars forever ! Ima have to find me a new movie partner though”.

Lauren also shared a post on her Instagram account, where she described the day. She writes, “I couldn’t have asked for anything more than walking the waterfront of my hometown with just my boys and my cousin stalking us in the trees.”

Then, Lauren says that it was a surprise, adding, “I blow almost every surprise and this one got me, I didn’t see it coming..even when Linc spotted my cousin hiding”.

If you’re a fan of Teen Mom 2, you might know that Javi was with his co-star Briana DeJesus until they split in January 2018. Prior to that, he was married to Kailyn Lowry. They got married back in 2012. Then, Kailyn filed for divorce in 2015. Their divorce was finalized in 2016. The two share one son, Lincoln, who was born in 2013.

Are you excited for Javi and Lauren? Let us know in the comments below!