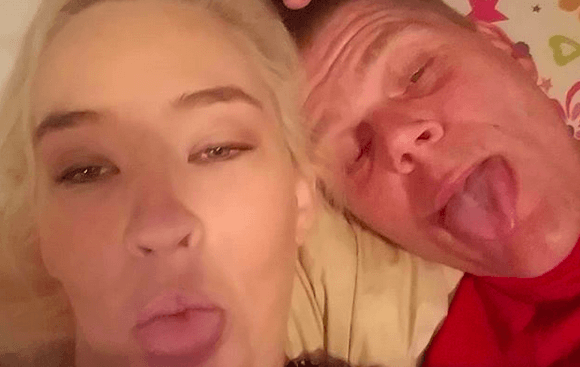 Mama June Shannon is known for Here Comes Honey Boo Boo and Mama June from Not to Hot. She and her boyfriend Geno Doak are in the spotlight often, but it’s not typically for good reasons. In the past, they have been caught with drugs. At one point, they were living in a casino. They have managed to stay out of the headlines for a little while, but now they are back.

On Monday, June 17, one of Mama June’s neighbors shared a video with TMZ. In this video, you can see that a car has crashed into a garage door. The car is Geno’s SUV and the home belongs to Mama June. The home is located in Alabama.

According to witnesses in the neighborhood, Geno crashed into the garage and began blaring his horn in hopes that his girlfriend would come out to help. After a few seconds, she did come out in a “see-through gown” as the neighbor recording the video calls it.

Then, Mama June gets into the passenger seat and leans over to help Geno. It’s likely that she was helping him unbuckle his seat belt.

After he gets the help he needs, Geno emerges from the car. Immediately, it’s obvious that he isn’t stable. He begins stumbling around the vehicle. It looks like he’s going to go inside, but he goes back to the car and continues to stumble.

In addition, he’s only wearing socks and shorts. His shorts are falling down as he tries to stand up straight. At one point, his girlfriend tries to help him pull up his shorts, but he won’t let her. By the end of the video, he’s simply trying to sit down, which he can’t seem to do without struggling.

What is Geno Doak and Mama June’s history?

Geno and Mama June have been together for six years, which makes it seem like they are committed. They definitely seem to stay together through the good and the bad. In the past, Geno has gotten in trouble for domestic violence and was even charged. He was caught sexting other women behind Mama June’s back.

As mentioned, they were living in a casino together. This was about a month ago and it’s unclear where they are living now. It’s possible that they are now living at Mama June’s home because of the video. Now, Honey Boo Boo is saying she won’t live with her mom if Geno is still there.

What do you think of the video of Geno and Mama June? Let us know in the comments.