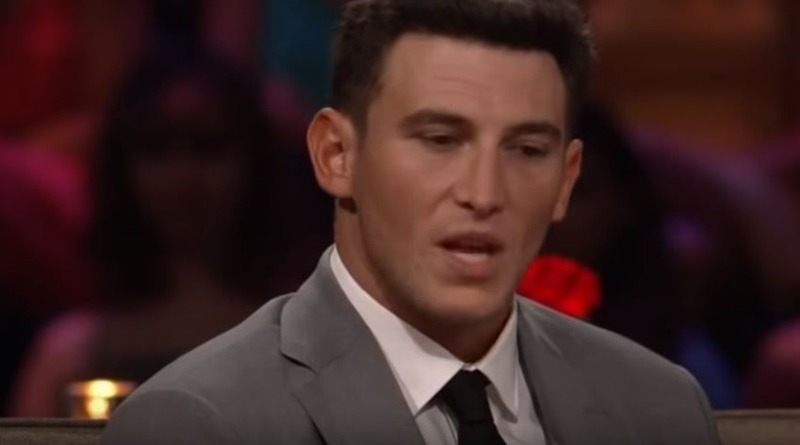 Bachelor in Paradise Season 6 already started filming and social influencer, Reality Steve‘s dishing out plenty of spoilers. In the last day or so he teased that there’s trouble in paradise.  TV Shows Ace noted that”Reality Steve wrote a tantalizing tweet, saying, “We are less than a week into BIP filming and I’m hearing a giant sh*t show already. Like, big time.”‘ More recently we learned who he talked about and it seems it’s Blake Horstmann. Fans ask if he’s another Dean, but it seems not. In fact, he’s worse.

We know that filming started about a week ago for Season 6 of Bachelor in Paradise. The ABC show premieres on July 29 and the original cast got leaked by Reality Steve. TV Shows Ace noted these include, “Blake Horstmann, Kevin Fortenberry, John Paul Jones, Dylan Barbour, Cam Ayala, Wills Reid, Derek Peth, Chris Bukowski, [and] Clay Harbor.”

Since those leaks, we hear the Luke S will also be there. That came from DCist, who reported on June 12 that “Reese Edmonds, Stoney’s bar manager,” said Luke S won’t return to work until he completes his filming for Bachelor in Paradise. Plus, in an Instagram Story, Luke P teased about heading to Santa Fe which should spice things up.

Is Blake Horstmann the new Dean on BIP?

Fans of Bachelor in Paradise can recall that Blake Horstmann featured in Becca Kufrin’s The Bachelorette. Reality Steve told us that the women involved include mostly Colton Underwoods cast-offs. The names so far emerged as Hannah Godwin, Demi Burnett, Katie Morton, and Tayshia Adams. Others that he teased include Have Aver, Caelynn Miller-Keys, Nicole Lopez Alvar and Sydney Lotuaco. Another name teased is Onyeka Ehie. Now, it looks like Blake’s trying on a Dean Unglert act with the ladies. Or, is he?

After tweeting about the “Giant sh*t show,” Reality Steve posted again, and we may now assume the “sh*t show” comes from Blake. In his newer post, Steve wrote, “Ok fine. One hint about “Bachelor in Paradise.” Through one week of filming, it’s the Blake Horstmann Show and it’s not even close. Nor is it good.” Oh well, that sounds very much like Blake’s taking a different approach to the way he handled Becca K.

Ok fine. One hint about “Bachelor in Paradise.” Through one week of filming, it’s the Blake Horstmann Show and it’s not even close. Nor is it good.

Reality Steve talks Blake and Dean in reply to a follower

Until now, fans assumed that given the chance, Blake and Hannah would team up. When Blake stayed in on Becca K’s show right until second place, we all saw a really nice guy. Hannah seemed very nice as well when we saw her with Colton who gave her the heave-ho. In fact, as a couple, Blake and Hannah sound like a good match. But it seems Blake’s on a mission to juggle more than just one woman.

One follower of Reality Steve asked, “Is Blake the new Dean?” Obviously, they talked about Dean Unglert. Fans of Bachelor in Paradise can recall that in season 4, he juggled both Kristina and Danielle. Now, with Reality Steve continuing the conversation, it turns out that Blake could be even worse.

No, he’s not the new Dean. Dean only juggled two women https://t.co/cstipUbawS

Worse than Dean is juggling three or more women at once

Reality Steve put out the message that “whatever you think it is, it’s worse than that.” It looks like from the various twitter threads that Blake’s juggling more than two women, so that means at least three, and possibly more. In his finale with Becca K, Blake said he “won’t be scared of falling in love again.” Well, it looks like he’s certainly not scared down in Mexico. What do you think about the possibility that Blake Horstmann’s not only acting like the new Dean but is, in fact, worse? Sound off your thoughts in the comments below.

Remember to check back with TV Shows Ace often for more news about ABC‘s Bachelor in Paradise.