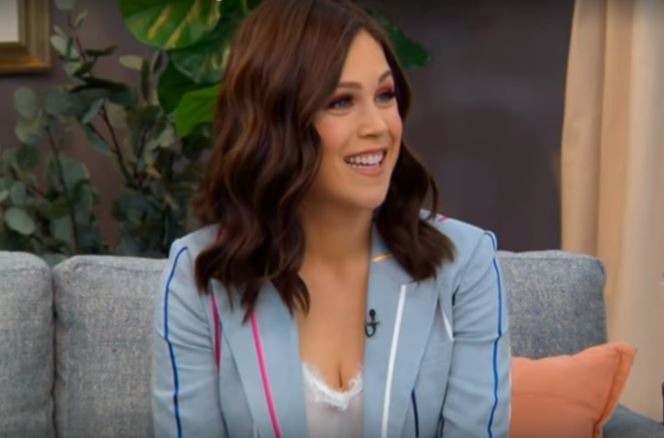 The beautiful Erin Krakow of When Calls the Heart is a magnet for the camera. Far beyond her outward beauty is a spirit that has enhanced countless characters.  From Army Wives to NCIS, the Juilliard-trained star brought depth and intuition to the screen before settling into her on-screen home on WCTH. She certainly mastered how to create a perfect emotional cliffhanger in her drama’s Season 6 finale.

While in the arms of Lucas Bouchard (Chris McNally), who was her ladies’ choice at the Founders’ Day dance, her eyes set on Mountie Nathan Grant (Kevin McGarry) as he goes out the door.  While her body stays totally “in frame,” Erin Krakow’s eyes speak pages of a script in conflicted emotions.  Faithful “Hearties” can only wonder until next winter whether Elizabeth will follow the path of her gaze.

Erin Krakow now has a tumultuous and still triumphant When Calls the Heart Season 6 behind her.  She and her new cast members and familiar cohorts are comfortably settled into Hope Valley.  They are adjusting to each other and the new trends of the future in their own ways as characters.  They are proving to be good friends off the set as well.

Erin Krakow stopped by Home & Family last week, as posted June 5, and being the professional that she is, she didn’t dish about many specifics for her character in the future.  She did say that Elizabeth may be ready for romance to blossom in Season 7 and that she is definitely ready for some summer travels very distant from Hope Valley.

Near the close of her visit with hosts Cameron Mathison and Debbie Matenopoulos, Erin Krakow divulged that vacation time in Hawaii was on her summer docket.  Erin is an avid photographer, and the diverse landscape of beaches, lava fields, and lush tropics that seem always in bloom will make perfect subjects for her lens.  The brunette beauty is also a devout vegan. She may decide to delve into some island culinary delights.

Erin mentioned that she will be heading to New York for “a very special birthday” of a When Calls the Heart cast member.  Krakow loves to share sweet moments with her followers so glimpses of those good times may be revealed later.

No kiss and tell

The When Calls the Heart leading lady seems just as excited as any of her fans to find out who and how the two handsome suitors seeming to vie for Elizabeth’s affections find their future.  The star expressed some very firm opinions in an earlier visit regarding not closing Season 6 with a kiss.

The show and its cast deliberately chose to move delicately and carefully. This is out of respect for the character of Jack Thornton and Elizabeth.  It was nearly a full season before Jack and Elizabeth shared a kiss. Krakow insists that “rushing into a romantic ending” would be neither appropriate or respectful for the widowed mother.

Krakow does declare that Elizabeth has “some pretty decent options” when it comes to opening her heart to love again.   There is still no rush into romance– only the admission that Elizabeth will be “more ready” to entertain the possibility.

The possibility is enough to please devoted When Calls the Heart fans and keep them dreaming through the warm months.  They can always revisit past episodes in the chilly and rugged Northwest Territory.

In the meantime, Erin Krakow will be blowing out candles and savoring the Hawaiian sun before returning to Vancouver to shoot Season 7.

She has plans to shoot another Hallmark Channel movie, too.  Her feature, Dude Ranch, co-starring Ryan Paevey and the precious Ava Grace Cooper (away from the Hope Valley classroom) is set to air later this summer.

Erin Krakow can juggle many hats whether in snow or sun. Don’t miss When Calls the Heart when it returns with new episodes.