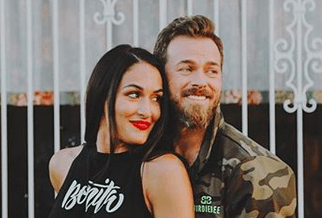 Nikki Bella and Artem Chigvintsev have been together since January. This relationship began after Nikki split from her fiancé John Cena. Now, Artem and Nikki have been spotted spending lots of time together. Nikki and Artem made their relationship Instagram official in March.

Well after that season finale 😳 First thing I’ll be talking about this Wednesday… oh and all those paparazzi photos (thanks for all the great shots 🙄 and smashing my food 🙄 lol) Swipe up in my IG story. #thebellaspodcast #bellaspodcast

It all started when the pair was partners on Dancing With the Stars during Season 25. They really hit it off and their friendship progressed quickly. They are pretty public with their relationship and share plenty of updates via social media. Their fans love seeing them together and happy.

Things aren’t super serious between the two at this point. As of right now, they have yet to label themselves. Nikki described their relationship to Us Weekly and said, “We’re dating heavy. Like, I only stay the night at his house. Let’s put it that way. … But I don’t like the titles ‘boyfriend and girlfriend.’ It freaks me out.”

Artem Chigvintsev on “The Bellas” podcast

On Wednesday, Artem joined Nikki and Brie Bella on their podcast, “The Bellas”. Nikki and Artem talked about their recent reunion. Nikki said, “Artem flew all the way from London to Napa Valley to meet me at BottleRock. I hadn’t seen Artem for a week and a half and I’ll admit during that week and a half, I realized how much I missed my, beautiful, smart, handsome … dancer.”

Then, Brie asked an important question. She said, “So are you saying you wanted to make him your boyfriend?” The question makes sense. Artem and Nikki have been together for a decent amount of time now. They seem serious and they are definitely exclusive. Some think it’s weird that they don’t refer to each other as boyfriend and girlfriend yet.

Recently, Nikki posted an adorable video of herself and Artem when they were finally reunited last month. She said, “I’m not saying that … what I’m saying is when he was gone I realized how much I missed him, like, tons. So I said, ‘Brie I want to have it on tape. Like, I haven’t seen Artem in so long, so film me. … But then it was so cute because I ran up to Artem and the driver was trying to ask for my photograph or a photo or something, but I was like beelining for my man.”

Nikki Bella thought Artem Chigvintsev might propose to her

Artem mentioned the said, “I’d been away for 10 days and that is a long time. I think it’s the first time we’ve been apart for 10 days in quite a while. I did miss you a lot.” Immediately, Nikki and Brie freaked out and asked if Artem was going to propose.

It quickly became obvious that Artem was not planning on proposing. Maybe they aren’t at that point yet or Artem just doesn’t think it’s the right time. Brie jokingly said, “We go from no labels to getting engaged!”

Maybe Artem and Nikki will get engaged in a few months. For now, they seem content where they are, even if they don’t have any labels.

Do you like Nikki and Artem as a couple? Are you hoping they get engaged? Let us know in the comments!