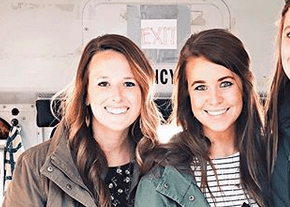 For a while now, Jana Duggar has been referred to as the Cinderella Duggar. She is 29-years-old and has yet to be in a courtship. Meanwhile, her younger siblings have gotten married in their early twenties.

Because Jana has yet to get married, plenty of rumors have begun circulating about potential courtships. Fans have even speculated that she may be dating Duggar family friend Laura DeMasie. She has denied these rumors in the past.

Some fans did comment on the coincidence and mention how fast the kids were growing. Several fans were focused on someone else in the photo instead though.

In the background of the photo Anna posted, fans noticed a young man they don’t recognize. Fans haven’t seen him on any episodes of Counting On or in any pictures with the Duggars. Immediately, fans began asking about him. Somebody commented, “Who is that gentlemen in the picture!?”

One fan commented, “Who is the man in the back in the chair???? (Secretly thinking its Jana’s new friend)”. Another fan had the same idea and replied, “I was going to ask the same question! We won’t get an answer though”.

A couple of fans disagreed with what the original comment said. One fan said, “Yeah Right. So not her type”. Another added, “let’s hope not!!” One more fan chimed into the conversation and said, “he looks…like 18 lol”.

Fans are speculating that this man could be courting Jana. As of right now, a courtship has yet to be announced. Still, fans are getting their hopes up about him.

In reality, this mystery man could be a friend of the Duggars. With so many children, it’s likely that they have friends over often. The Duggar family might invite others to join them for “Bibletime”.

At this point, the Duggars have not said who this guy is or whether he is courting a Duggar. They do tend to interact with their fans via social media, but they may choose not to comment on this specific speculation.