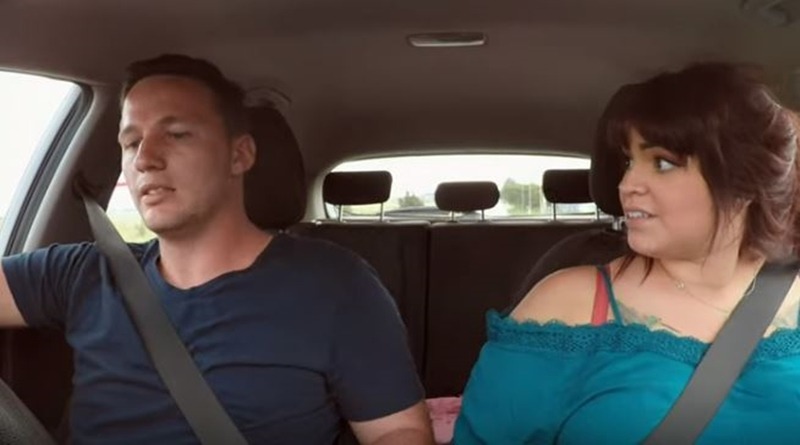 90 Day Fiance: The Other Way premiered Monday and we saw Tiffany out buying cosmetics for her wedding and explaining that her family doesn’t know the half of Ronald’s past in South Africa. When she later goes to try on her wedding dress, she confesses she feels bad as her mom cries. It seems she won’t be at the wedding in South Africa, and she’s not fully on board with this marriage. Actually, mom does not know about Ronald’s criminal past. That’s a problem, as it means he’s unlikely to ever get a visitor’s visa to the USA.

90 Day Fiance: The Other Way quick recap of Tiffany and Ronald

To recap, Tiffany fell pregnant and birthed her son Danielle at age 18. Her mum stood by her and the baby daddy took off. Now, her son Daniel’s her life and if Ronald’s to marry her, he must show full commitment to Daniel. She and Ronald met when she visited South Africa with a friend and they almost instantly fell in love. She visited Ronald again in South Africa and decided to get hitched.

However, for Tiffany, it’s a huge decision as there’s almost no way Ronald could get a K1-Visa to marry her and live in the USA. That’s because he has a criminal conviction. Tiffany’s prepared to relocate to South Africa even if it means Daniel changes to a South African school. But for her mom, who’s already not totally buying into the marriage, the criminal conviction could mean a big shock. In fact, if Tiffany commits, it’s even unlikely Ronald could make a trip to Maryland to visit with the rest of the family.

Ronald’s conviction and rehab may come under USA Immigration microscope

In the premiere episode of 90 Day Fiance: The Other Way, we see Ronald talking to the producer via online communications. Ronald confesses he had a gambling addiction. In fact, it was so bad that he repeatedly robbed his mother’s house to sell things to go gambling. He said that even when she left for a vacation, she’d return to find the home empty. Ronald explains that he gambled in the hopes of making money, but lost, so he ran out of money to continue his addiction.  He committed theft so often that eventually, sick of it, she had him prosecuted for burglary.

So, the next problem is that South African criminal convictions limit where you can travel. Plus, he needs to sort out his gambling addiction. Despite his rehab efforts, he relapsed once already. Fashing forward six months a week before his wedding he’s in a Christian Rehab, apparently saved by the Lord Jesus. Hmmmm. If you have a criminal conviction, you may apply for a special waiver to visit the USA. However, part of that may involve letters from your church to get your case considered.

Visa waivers for criminals convicted who wish to visit America

Spoiler alert for 90 Day Fiance: The Other Way: Earlier, TV Shows Ace wrote an article citing Starcasm who noted, they “uncovered loads of photos indicating the couple married despite Tiffany’s fears. The ceremony took place on  October 20. In fact, Starcasm noted, ‘”There are lots of wedding photos online, and they include Tiffany’s eight-year-old son Daniel.”‘ Well, we don’t know if they still live in South Africa with Ronald. But, we dug around a bit and it looks like even visiting the USA could be problematic.

For Tiffany, she can return to the US to see her family any time she has the funds for the air ticket. But for 90 Day Fiance newcomer Ronald, that might get a lot trickier. According to ALL LAW who know about these issues, he may be able to get a visa to vacation but it’s complicated. Sometimes, people who apply for a waiver receive short term vacation permission. But, it’s done on a case-by-case basis. To obtain a B Visa (visitor) they consider things like:

Just one of the requirements includes “a first criterion.” That “is by citing how you contribute to your community in your home country, such as through your work, volunteer activities, church, and the like.” Could that be why Ronald went to a Christian rehab? He’s really into Jesus these days, not a bad thing if you need help staying on the straight and narrow. What do you think? Sound off your thoughts in the comments below.

Remember to check in with TV Shows Ace often for more news about 90 Day Fiance: The Other Way.