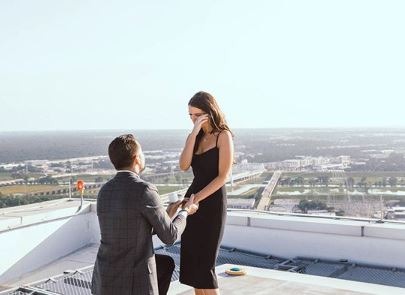 Nick Viall had sent Raven home after the fantasy suite date on Season 21 of The Bachelor in 2017, while Adam appeared on Rachel Lindsay’s season of The Bachelorette the same year.

Rachel had even predicted that of all the guys from her season, Raven would click with Adam.  Which worked out really well for everyone since Rachel had told Raven, “Don’t mess with my top three.”

Raven Gates began their season of Bachelor in Paradise on a date with Robby from JoJo Fletcher’s Bachelorette season. In episode three, she and Adam went on a date and hit it off. But not so fast! The pairing-off is never as easy as it might seem in Paradise. On episode four, Sarah Vendal, also from Nick Viall’s season, showed up and took Adam on a date. A few episodes later, Adam wormed his way out of this love triangle by giving a rose to Raven — and from then on they seemed solid. They left Paradise not engaged but “as a couple.”

I’m keeping you forever and for always We will be together all of our days Wanna wake up every morning to your sweet face… 💞Always 💞 . . . . . May 31, 2019 📷: @courtneyelizabethmatthews

Raven told the former Bachelorette, “I think that’s coming soon. We’re going to the temple this Friday to have interfaith counseling [about] family, engagement, and children.” Raven is Christian and Adam is Jewish.

Prior to now, the couple has been vocal that they do not want to have a televised wedding.

Many of Bachelor Nation’s fan favorites congratulated the newly engaged couple in the Instagram comments section:

“Adam did good on that ring,” new dad Arie Luyendyk Jr. commented on Gates’ post while he said, “Congrats you two!” on Gottschalk’s post.

We’re can’t wait to see if any more super couples will emerge from this season of Bachelor in Paradise which premieres on Monday, July 29, 2019.