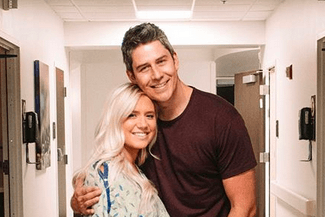 On Wednesday, former Bachelor stars Arie and Lauren Luyendyk welcomed their first child into the world. Based on what they said in their announcements, the baby seems to be healthy.

Following her birth, the couple shared her name, Alessi Ren. They released the first photo of her, along with her name, weight, and length, just 12 hours after she was born. Because they had been updating fans about Lauren being in labor and going to the hospital, there were lots of fans waiting for some news.

Since she was born, Arie and Lauren have seemed overjoyed. They have been updating Instagram and showing off their adorable baby girl. The new parents set up an Instagram page for Alessi before she was born. They have yet to post a picture of her there, but they will probably share on that account soon enough.

In one recent post, Lauren shared a picture of her sleeping daughter. In the caption, she writes, “I’ve never seen anything more perfect in my entire life.” Then, in the announcement post, Lauren wrote, “She is sweet, calm and @ariejr and I could not be more in love with her.”

I’ve never seen anything more perfect in my entire life.💗

In a recent Instagram post, Bachelor alum Arie briefly opened up about his experience as a dad. Because it is just an Instagram post, he didn’t get too deep. In this caption, he says, “Fatherhood is the best. I think my heart just grew two sizes.”

In the photo he shared alongside the sweet caption, he is laying down with Alessi asleep on his chest. He shared a second picture in the same post. In this picture, Alessi is swaddled, awake, and has a cute bow on her head.

Fatherhood is the best. I think my heart just grew two sizes ❤️

Earlier this week, while announcing the baby’s name, Arie created an Instagram post and wrote, “This was first time she laid eyes on me and I’m forever changed”. Though these are the first daddy-daughter posts, there are many more to come.

It looks like both Lauren and Arie are enjoying parenthood. Right now, they are probably still learning the ropes and trying to get enough sleep while caring for the newborn. Still, they seem very happy to have finally met their little one. This little girl definitely has two extremely loving parents. They have been thrilled about parenthood ever since Lauren became pregnant.

What do you think of Arie’s sweet post about his daughter? Are you loving the updates they are sharing? Let us know in the comments!

Don’t miss The Bachelorette when it airs Monday nights on ABC!