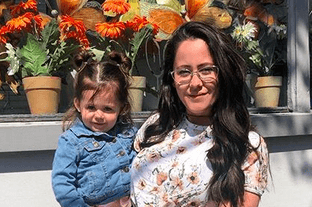 On Tuesday, a judge ruled that Teen Mom 2 star Jenelle Evans temporarily will not regain custody of her children. According to the reports, this ruling applies to Jace, 9, Kaiser, 4, and Ensley, 2. In addition, Maryssa, who is David Eason’s daughter and Jenelle’s step-daughter, is living with her mother, Whitney Johnson.

Recently, an insider spoke to E! News and said,”Jenelle was stunned that the judge did not give her back the kids. They are all for the time being remaining with their respective caregivers.”

Right now, Barbara Evans, Jenelle’s mother, is caring for Jace and Ensley. When she opened up about the current custody issues, she said, “Of course I would like for Jenelle to get them all back eventually, but certain things have to happen first.”

Altogether, David and Jenelle have spent four days in court. According to TMZ, several people, including Jenelle’s ex Nathan Griffith, have testified against the couple.

For now, Jenelle has said that she is “focusing on getting her kids back and she is focusing on working on her marriage.” So far, it looks like Jenelle and David are cooperating with the legal team and doing what they can to improve the situation.

Why did the Teen Mom 2 star lose custody of her kids?

The Teen Mom 2 star has been in the headlines pretty heavily since the beginning of the month. In early May, Jenelle’s husband David shot and killed the family’s dog, Nugget. His reaction was due to the dog snapping at David and Jenelle’s two-year-old daughter, Ensley. From the pictures and videos shared, fans didn’t notice any injuries aside from a small scratch on Ensley’s face.

Since this incident, CPS has chosen to investigate the Evans-Eason household. Prior to losing custody of her three children, Jenelle’s kids were living with relatives temporarily. Now, with the temporary loss of custody, Jenelle and David will not be seeing their kids. There is a chance that they will be allowed to have short, supervised visits.

From what Jenelle has shared via social media, this whole incident has been very draining. Between mourning the loss of her dog and dealing with these custody battles, she feels exhausted.

For more updates about Jenelle Evans and other reality TV stars, don’t miss the news from TV Shows Ace!

Jim Bob And Michelle Duggar’s SHOCKING Marriage Details Resurface
Why Amelia Gray Hamlin Apologizes To Her Dad Harry
Kanye West Wasn’t As Committed To Kim Kardashian As She Is To Him
Brittany Cartwright Shares Her Incredible Weight Loss Transformation
‘Welcome To Plathville’: Is Ethan Unhappy With Who Olivia Is Becoming?