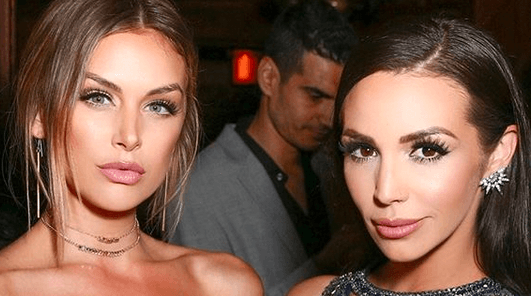 On Bravo’s Vanderpump Rules, fans get to learn a lot about the cast members’ lives. Not much is kept a secret on the show. Everything is out in the open. One thing that is frequently shown on the reality TV show is romance. Fans have seen everything there is to see about the stars’ romantic encounters.

Even the drama and negative aspects of the relationships are shown. This is pretty much a given based on the show’s premise.

One star, Lala Kent, is a bit of an exception. She is in a relationship, but it isn’t being filmed. Lala got engaged to movie producer Randall Emmett in September 2018 and plans to get married in 2020.

Because everyone else’s relationships are filmed on the show, it doesn’t make sense to fans why Lala’s wouldn’t be. On the reunion episode of the show, Lala shared, “Number one, I don’t want him to be on it. The things that go on on the show, it does get very real and nitty gritty.”

When Lala’s co-stars got frustrated with her, she said, “There are a lot of men who don’t want to be on the show and Randall is one of them.”

What do her co-stars have to say about this?

The Vanderpump Rules cast doesn’t think it’s fair that Lala’s relationship is kept behind closed doors. This is especially true because their own relationships are so heavily documented. Fans can see the highs and lows of the stars’ relationships, but Lala is exempt from that.

A source recently spoke with Hollywood Life and shared, “Lala got called out on the VPR reunion because the whole cast doesn’t think it’s fair she’s allowed to pick pieces of her life to show. Randall has made it very clear he doesn’t want to be on the show, and even though he makes appearances on other reality shows and projects, he wants nothing to do with the VPR show itself.”

The source then added, “Lala protects him and says that she gives enough of herself on the show to make up for it. She openly discusses her battles with anxiety, being sober, etc. But the whole cast is sick of it and wants her to have to show her whole life next season, now that she’s full time cast. Everyone feels it’s bullsh*t and unfair.”

On the reunion episode of Vanderpump Rules, even Andy Cohen had something to say. To Lala, he said, “I’m sitting here looking around and thinking about everyone putting their relationships out there. Do you think that’s fair to the others that you’re on the show and you don’t show everything?”

What do you think should happen? Should Lala be sharing more of her life on Vanderpump Rules? Let us know your thoughts in the comments!