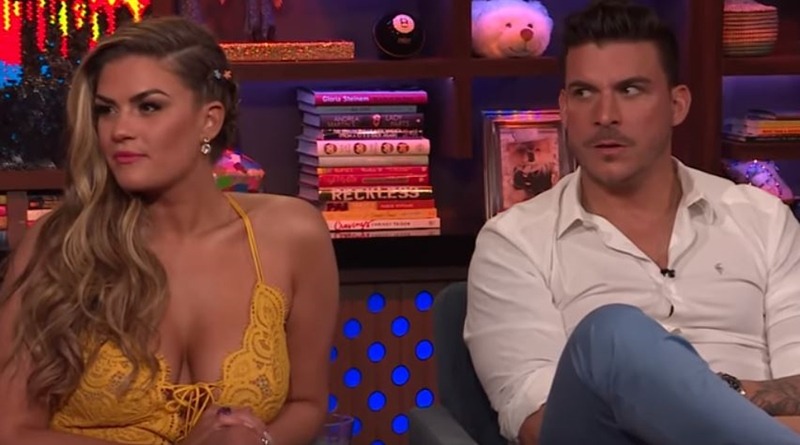 Vanderpump Rules fans know that Brittany Cartwright and Jax Taylor went through some difficult times during their often stormy relationship. It all looked to improve ahead of Christmas a few years back. However, sadly Jax’ dad passed away. After that, presumably, because Brittany helped nurture Jax through his grief, their relationship grew stronger and stronger. Soon, they marry. In the meantime, Brittany celebrated the 4th anniversary of them being together today with a sweet message to Jax on Twitter and Instagram.

At one stage, Jax accumulated a lot of haters on social media. It started when he cheated, and then Faith Stowers made a huge drama on Vanderpump Rules. At once stage, she even alleged she may carry Jax’ child. Brittany cried when she talked about it, and it looked like maybe everything ended. However, it didn’t, which shows this couple has strength and maturity. Certainly, both of them look healthy, successful, and ready to build a long and meaningful life for themselves. Of course, fans really hope for some kids!

Beautiful Brittany and her man will marry next month. Fans get to share in the moment, as it’s getting filmed and may show up on Vanderpump Rules next season. However, excitement for the wedding never distracted Brittany from remembering how long they’ve been together as a couple. Four years exactly, Brittany noted the day on her Twitter and on Instagram. May 24, looks to remain a special day for her in the future.

Sweet Tweet to Jax from Brittany on 4th Anniversary

Brittany took to her Twitter and Instagram to share her 4th anniversary of being with Jax. In her post, she wrote, “Today we have been together for 4 years! I love you so much honey happy anniversary! Just a little over a month till we get married! Ahhhh I’m so excited for this next chapter in our lives ❤️❤️ @mrjaxtaylor.” The photo shows the couple kissing, and they look very much in love. On Twitter, Jax replied, saying, “Love you baby girl!!! So excited to spend the rest of my days with you!! Happy four years!!! I love you.”

Fans of Vanderpump Rules reacted to the photo, with one saying, “I absolutely love this photo Britt!! You look so gorgeous and happy. I’m so excited for you! Who would’ve ever thought in Vegas, your fairytale would come true?” Another posted, “I’m so happy for you! I truly believe Jax is a different man because of you. Best wishes for a lifetime of happiness!” Others really came across with genuine blessings on the pair.

Today we have been together for 4 years! I love you so much honey happy anniversary! Just a little over a month till we get married! Ahhhh I’m so excited for this next chapter in our lives ❤️❤️ @mrjaxtaylor

Others felt once a cheater, always a cheater. However, nobody really knows their relationship as deeply as Brittany and Jax do. So, wishing them well and hoping it all turns out fine never hurt anybody. Anyway, these two pretty much ignore their haters.

What do you think about the sweet message that Brittany Cartwright posted up for Jax on their 4th anniversary as a couple? Do you wish them all the best for their future married life? Sound off your thoughts in the comments below.