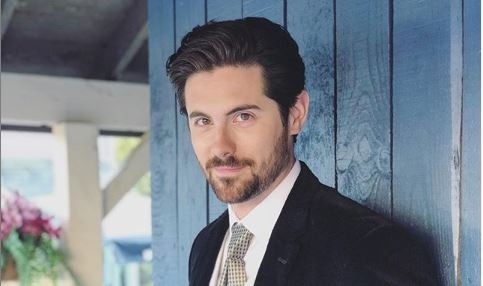 The strikingly handsome Chris McNally of When Calls the Heart Season 6 is definitely making a memorable impression on the people of Hope Valley.  In his portrayal of the saloon owner, Lucas Bouchard, Chris McNally is never afraid of taking a risk on a winning hand at the card table.  It is also not afraid of making a grand gesture to demonstrate his pure intentions for Elizabeth Thornton, brought to life by Erin Krakow.

In real life, Chris McNally plays it much safer than his flamboyant character.  He loves having dinner and savoring some wine with his cast mates.  On-screen, there is palpable tension between the new Constable of When Calls the Heart, Nathan Grant, and his character, but on set, the relationship is quite different.   The man who keeps law and order in Hope Valley has a lot of fun playing tricks on his castmates and has a way with horses.

Chris McNally is an avowed animal lover, and he spreads the word of “Adopt, don’t shop,” wherever he can.  When the star stopped by Home & Family on May 17, he talked about his own precious pets,  his “pitskys” (part pit bull part husky), and how their differences still charm his heart.  The actor also enjoys the bond he shares with his When Calls the Heart co-stars.

Lucas Bouchard hasn’t managed to convince everyone in Hope Valley that he has good intentions, but he has persuaded Elizabeth Thornton that he wants to donate the library for the common good.   When a man shows that he cares about what matters to his woman, he can definitely carve a place in her heart.

The story of Charley and Bowie quickly won over Chris McNally’s heart.  The pair were part of a litter of eight pups left in a cardboard box at the Van Nuys, CA airport parking lot.  McNally describes that the bunch were just “dumped.”  Bowie’s tail was broken in three places, and all the pups suffered from worms and malnutrition that was so severe that it took “a decent amount of time to nurse them back to health,” according to McNally.

Because of their owner’s heart, both dogs have much different lives now. “They go swimming.  They go camping,” Chris explains, along with regular time in the pool and at the park.  The star calls Bowie “the seeker of comfort,” who will find the softest place to lie wherever he is.  Charley, on the other hand, is “like a rocket” who cannot slow down for anyone.  McNally estimates that the canine cuties have been apart “maybe only three nights” in their lives.  No wonder they love snuggling

Taking a look at Chris McNally’s social media gives a good portrait of how this family of furbabies has shared adventures together.

Not so skilled on horseback

When it comes to horses, however, Chris McNally is not so confident.  He shared a picture of himself and Kevin McGarry, who portrays Constable Nathan Grant, on horseback.   “I was pretty nervous,” confesses Chris.  He instantly gives McGarry higher marks as an equestrian.

“He had all those years on Heartland, McNally credits, giving his castmate the riding advantage.

Chris McNally also gives Kevin McGarry the title of chief prankster on the When Calls the Heart set.  McGarry particularly enjoys hiding from his castmates and crew.  Unfortunately, though, the fun only works if someone is looking for him, and McGarry has been forgotten a few times.

When Chris McNally, Erin Krakow, and Kevin McGarry happen to be together in town, and not too busy on the drama’s Vancouver set, they love “to get together for dinner and wine and whatnot,” as good friends do.

Chris McNally has some secrets from the past still being problematic for Lucas Bouchard on When Calls the Heart next week.  In life off-screen and on, however, the future looks bright for Chris McNally, and his dogs have every reason for tail-wagging joy.