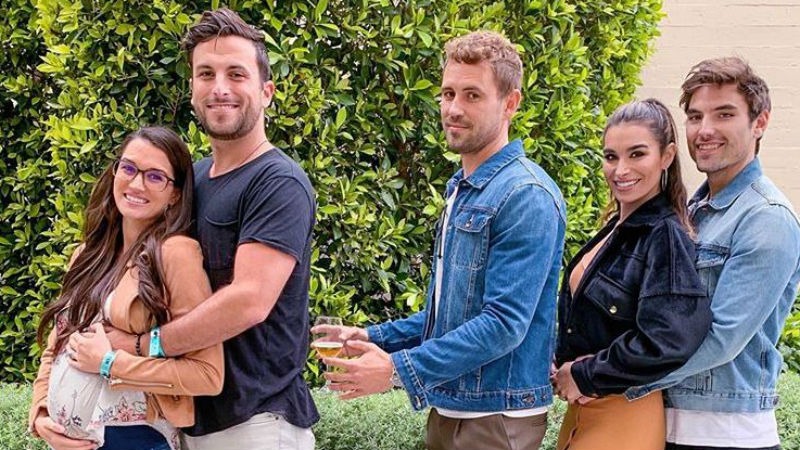 Once you’ve been on The Bachelor, chances are you will make a few lifelong friends. This is definitely true for alums Tanner Tolbert, Jade Roper Tolbert, Ashley Iaconetti, Jared Haibon and Nick Viall. These friends are often seen together. Now with Ashley and Jared’s wedding approaching, they have announced a new series they will all be working on together. They are all talking about wedding plans and the new show titled What Now?

US Weekly recently spoke with Ashley about all the exciting things happening in her life. Jared and Ashley are tying the knot in August in a reported small wedding. In What Now? Ashley talks about the what if possibilities involving her wedding.

Our reality show “What Now?” is OUT NOW on YouTube! 💻 The docuseries follows Nick, Jade, Tanner, Jared, and me in our lives now. It covers babies, pregnancy tests, new homes, wedding planning, strip shows (lol), and our friendship. 🎥 Episodes 1&2 are up now. Episodes 3&4 come out next Tuesday. Episodes 5&6 come out on 6/4. Link in bio and IG story!

Jade and Tanner get real on their pregnancy struggles

In a preview for the new show, Jade talks about how easy it was for her and Tanner to conceive their daughter, Emerson. However, the second time around did not go quite as smoothly. While Jade is now pregnant with their second child, a son, she emotionally shares her struggles while trying.

Jade says in the preview, “Having a hard time the second time around has made me wonder, ‘Maybe there is something wrong,’ like, the ‘What ifs?’ What’s wrong with my body?”

At least my beer is cold.

This group of friends always has fun together

It appears from social media when these five friends get together there is always fun and laughter. In a photo shared by Jade on Instagram, the two couples are seen in a prom pose while Nick is standing in between them doing a prom pose with his beer. Jared jokes by commenting “At least Nick has his beer.”

Jade captions the photo saying, “AHHH CAN’T BELIEVE ITS FINALLY HERE!! Don’t get FOMO, watch our new YouTube series “What Now” RIGHT NOW!
Swipe Up in my stories now, the first two episodes are finally LIVE!! (Also link is in my bio!) 💗💗 Also Nick prom posing with his wine is my spirit animal. 😂🙌.”

Don’t miss this fun series on YouTube as it follows these five Bachelor alums as they journey through life after roses. What Now? premieres on KineticTV Tuesday, May 21, at 6 p.m. ET.