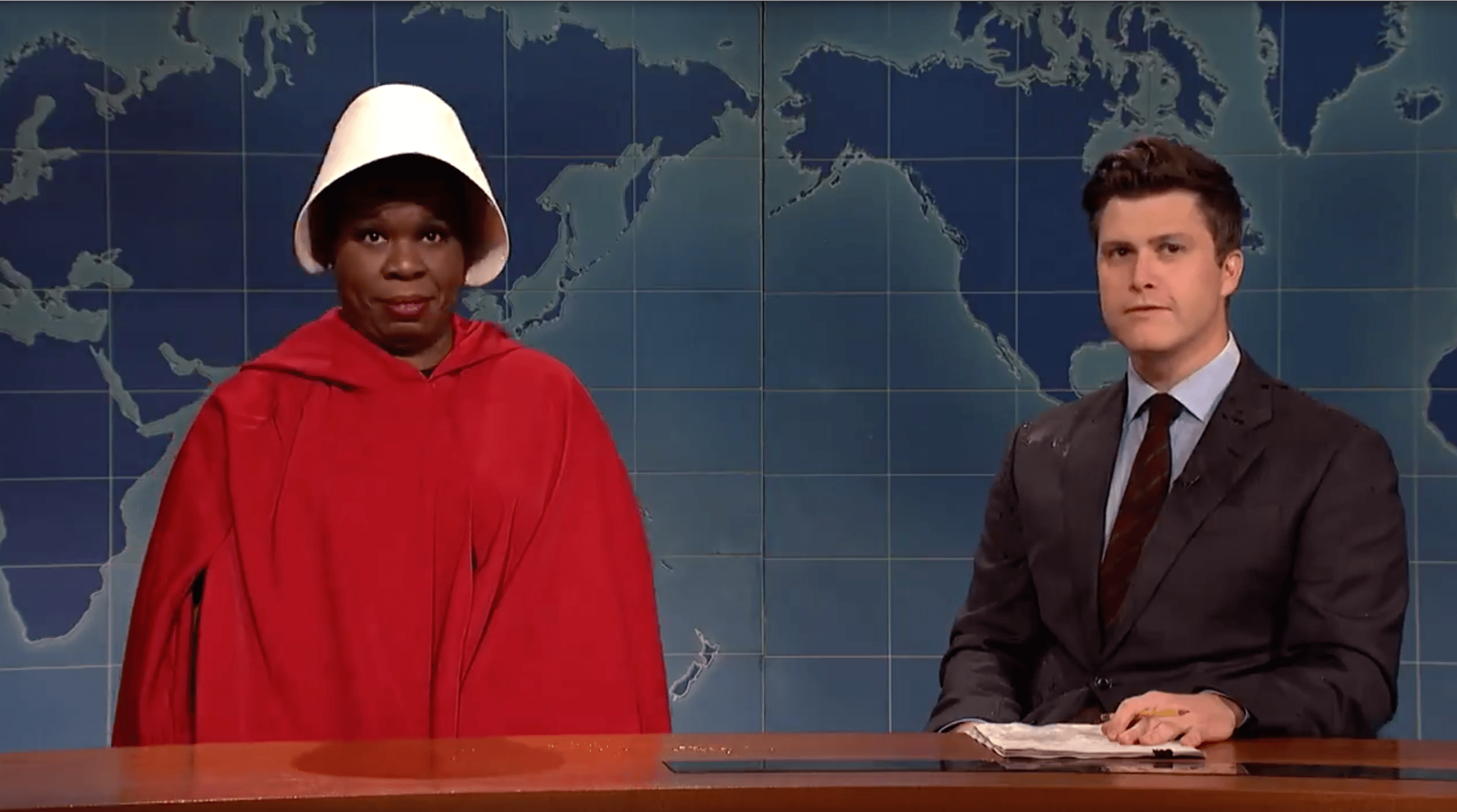 Fan’s who sat down to watch the SNL Season 44 finale this past Saturday night were treated to an interesting bit of ‘in your face’ politics when comedienne Leslie Jones blatantly mocked Alabama abortion laws. CNN reports that the super restrictive abortion laws are an attempt to overturn the decades-old Roe v. Wade judgment which made abortions legal back in 1973.

In the popular ‘Weekend Update’ show segment, hosts Michael Che and Colin Jost donned welcomed Jones as their segment guest as she rolled on set wearing a costume from ‘A Handmaid’s Tale’.  After a few introductory comments she ripped off satirical attire, revealing a t-shirt that read ‘MINE’ with an arrow pointed at her lower half.

The skit went into a short spiel about how numerous states are now working to put anti-abortion laws on the books. She went on to commentate on how these abortion laws are essentially inhumane and are an injustice against women. Jones didn’t forget to bring in the satire, however, stating:

“The next thing you know, I’m at Starbucks and they won’t take my credit card because I’m a woman instead of the regular reason, which is I don’t have no money on me.”

Jones had a lot to say about Alabama’s legislative ranks

The segment went on to address and poke fun at those who voted to put the laws in place. Jone’s referenced the ’25 white men’ whose votes were responsible for pushing the law. The actress compared the lot of them together as ‘looking like the mugshots of everyone arrested at a massage parlor.’

The Comedienne had a message for women everywhere

The segment really served as SNL‘s blunt, slap in the face answer to Alabama’s abortion laws. The writers even went on to address that they feel that the laws are dehumanizing for women and were quick to point out that it takes rights, free will, and autonomy out of women’s hands in a very regressive way.

“You can’t control women because, I don’t know if y’all heard, but women are the same as humans,” Jones continued. “Why do all of these weird-ass men care about what women choose to do with their bodies? I don’t care what you do with your 65-year-old droopy-ass balls.”

The bold and intentionally offensive segment concluded with Jones discussing the fact that she feels the Alabama abortion laws are essentially a ‘war on women’ and directly addressing the female SNL audience telling them that they are not alone and that she and many other women have their back.

“You can’t tell me what to do with my body,” Jones concluded.

While SNL clearly meant to make a strong political statement in support of women, not everyone is laughing about the skit. Did you watch the episode? How did you feel about the way the segment was presented? Tell us in the comments!