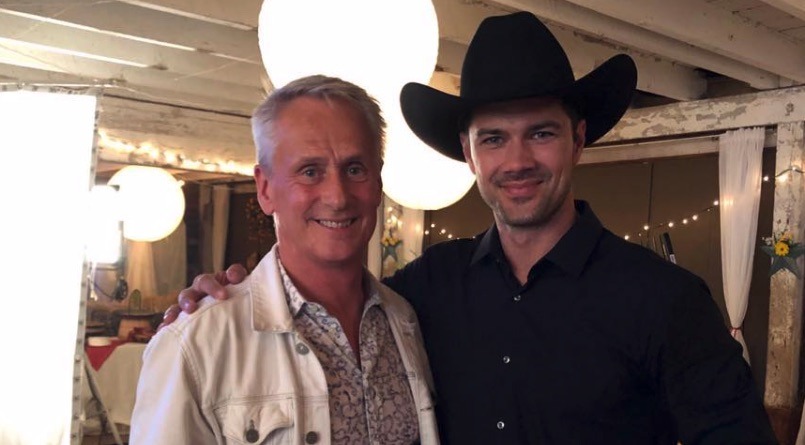 Is Ryan Paevey dancing with pain? The former General Hospital star has been quite busy this year, but his recent social media reevaluation indicates he may need to halt his current projects to take care of himself. What do we know?

The Harvest Love star’s fan site, RyanPaevey.net posted a photo of Ryan and his Dude Ranch dance teacher, Dale Neale. Ryan is standing tall and strong, wearing a black cowboy hat. The Unleashing Mr. Darcy actor himself commented, “I swear they are determined to teach me to dance..my mother will be thrilled.” A fan asked if his mom liked to dance, and Ryan shared that she not only liked to dance, but she was on Soul Train “back in the day.” He then reveled “She always joked they must’ve switched me at birth cause there’s no way I’m her kid and don’t dance, haha.”  A fan did remind him that he did a little bit of ballroom dancing in Unleashing Mr. Darcy.

After revealing that he has to put his jewelry making business Fortunate Wanderer on hold for a bit, he revealed that his shoulder’s “been really bad lately….was sorta hoping I’d get away with this one, but seems I may need to go under the knife after all.” How soon. Ryan tweeted that “Not sure, gonna call soonish and see what the process is, and the recovery time…trying to sneak this in with out impacting work this year.”

This is unfortunate for the talented actor. Hopefully he will not be sidelined for too long. He has really worked hard to get so many varied roles, but his priority should always be to take care of himself.

How did Ryan hurt his shoulder? He didn’t reveal the reason. Ryan seems to give the impression that this is an injury he has had for a while. Perhaps he hurt it when he was filmed falling during the new BET drama Games People Play? No one can forget that jogging scene and somersault!

Things sure started heating up for Bryce and Vanessa last night on #GamesPeoplePlay 👀 Ryan is also in the next episode, so don't forget — Tuesday on BET! pic.twitter.com/AFCOieiuko

Perhaps what is more amazing is that based on photos from his latest movie shoot, Hallmark’s Dude Ranch, Ryan does not appear to be favoring his shoulder. He has been photographed riding horses and playing guitar, and his athletic posture is still perfect.

What Are Ryan’s Other Movie Projects?

In his tweet conversation about Fortunate Wanderer, Ryan mentioned his other movie projects when he wrote, “Wanderer is gonna stay on pause for a bit…not forever, but i need a break. I’m really enjoying learning the guitar, and I’m trying to get some film stuff going. Little shift in focus…but there’s good stuff comin.” He has not officially announced anything new after Dude Ranch. He had mentioned that he is in several episodes of Season 1 of Games People Play, and may even be in Season 2. What are his other projects?

Ryan has also previously tweeted that they have green lighted another Mr. Darcy movie, but that has not publicly been confirmed as of yet. Could Ryan be in another Hallmark Christmas movie? The odds are pretty good that he could be. He is a very popular actor on Hallmark, and it would be safe to presume that Hallmark would like to have him star in one of their 40 Christmas movies that they are planning on airing over the holidays.

Are you concerned about Ryan Paevey’s shoulder injury? Share you comments below. Catch Ryan in From Friend To Fiancé, on May 25 at 9 ET/8 CT on Hallmark.