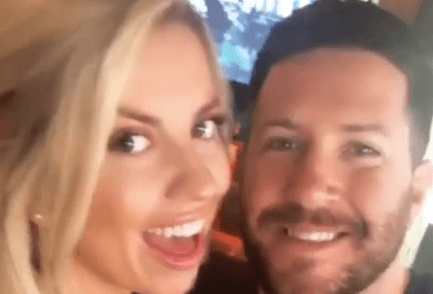 Temptation Island stars John Thurmond and Katheryn Golden were on the 2018 season of the USA Network show. On the show, things got somewhat serious between the two. We had not seen much from these two until recently.

Earlier this week, they each posted on Instagram. They were in Nashville together. Katheryn’s hometown is Nashville and John decided to pay her a visit.

When they created their Instagram posts, they must have known that fans would be hopeful that the two were dating. In Katheryn’s caption, she made to sure add, “For the fans: To answer your question about us being together, we are not. John and I share a special connection because of Temptation Island… one that no one other than our fellow cast mates will ever understand, and for that, he and I will always be a part of each other’s lives. But romantically we are not there anymore. The time and distance have proved to be the deciding factors for this relationship. I know he will find a woman that will meet and exceed his expectations one day.”

Then, she said, “Just because we aren’t involved romantically or in a relationship doesn’t mean we won’t continue to support each other or to remain amazing friends. We maintain a dialog almost daily and will continue to do so.” Katheryn’s post featured herself and John in a boomerang video.

John posted a short video of himself and a squirrel having a snack. Katheryn wasn’t in the video, but he wrote about her in his caption, saying, “Had a good time in Nashville with @katheryngolden. Thanks for showing me the city and being a great hostess.”

How did Temptation Island fans respond to these posts?

After it became clear that John and Katheryn are only friends, fans seemed disappointed. In the comments on the stars’ Instagram posts, fans hoped that they thought the two would hit it off after this trip together. Though the fans may be somewhat upset that they didn’t work out romantically, they are understanding.

In addition, some fans are saying that they appreciate Katheryn’s honesty. They are also applauding John and Katheryn for showing people how men and women can be friends without being romantically involved.

In the comments, it’s very obvious that Katheryn and John are some of the fans’ favorite Temptation Island stars. Fans only want the best for the stars.

Temptation Island has been renewed for a second season. Further news has yet to be announced.