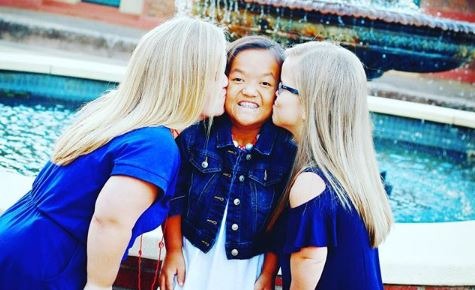 This week’s May 14 episode 7 of 7 Little Johnstons for Season 6 leaves out the therapy sessions with Dr. Galen Cole, but the family is still pondering serious issues.  Trent is still fearful of starting out on his own business. Amber is encouraging him to take small steps to try out the waters.  Elizabeth is shooting for a place on the soccer team, even though she has never played.   Everyone in the family is in on a surprise for her that she never sees coming on the field.

From business prospects to planning for the prom, the entire crew of the 7 Little Johnstons catches the entrepreneurial spirit.  At the same time, Elizabeth and Anna spin their attention to sharing a memorable prom night.

Putting one foot in the water

During their first counseling session, Amber told Dr. Cole that she was completely supportive of Trent starting his own business.   The dutiful dad still seems consumed with fear about not having enough to help his kids pay for school if the business risk doesn’t work out.   The couple decided during one of their bedtime chats to start small at the Forsythia Festival, a local arts and crafts market.  Most of all, Amber assures her husband that their love as a family will be strong enough to weather success, so-so, or not-so-hot outcomes when it comes to their new venture.

The cameras of the 7 Little Johnstons did seem to capture more of Emma talking this week. This is good progress for her communication skills.  One of the times she spoke up was when Elizabeth said that Brice, the “very nice” average-height boy that she’s “been talking to,” might need a push to ask her to the prom.  Emma made it clear that she and Anna couldn’t say anything “right now” because “someone” was there.  That gentle hint conveyed that something big was in the works.

Elizabeth’s heart and hard work in soccer tryouts were enough to get her on the JV squad.   She was upset that she never even got to play in the first game, which ended in a loss.   She didn’t suffer long from hurt feelings, though.  Jonah made sure that Brice walked out at just the right moment with his poster announcing that his “goal” was to take Elizabeth to the prom.  She buried her face as she gave him a hug.

Gearing up for dance steps and sales on 7 Little Johnstons

Much to her dad’s dismay, Anna turned down Trent’s offer to be her prom date. She did have a change of heart about going to the special event.  An old friend, Luke, began to text her, and the two struck up a deal to go together “just as friends.”  When Anna pooh-poohed the idea of heavy preparation for her prom dress, Elizabeth responded, “I guess you can go in your pajamas.”  Anna was quickly busted by both her sisters when she said she didn’t like to dance.  Emma’s expressions were priceless, and spoke a thousand words!

Trent and Amber have a great day-date at the “Peaches to Beaches” yard sale that stretches to the coast.  They go looking for items to refurbish for the festival, and bargains mean that they leave with money left in their pockets.

The girls all make items to sell, too.  Elizabeth has several paintings, and Emma and Anna create bracelets and bath fizzes. Trent displays his creative flair, designing a “picnic style” bracelet (Only he knows just what that is) and makes several birdhouses.

Stress gest to the family

The stress nearly strikes down the day for Trent before it starts, as the 7 Little Johnstons find out that they will be the last booth able to set up.  Jonah coaxes dad to “cool down,” along with his other siblings.  Once the trading started, Trent seemed totally calm and relaxed.  This family could take their crafting on the road.  Alex and Jonah were delighted to just be the cashiers.

With teamwork, as always, everything gets done. As soon as the selling starts,  customers give the 7 Little Johnstons all the business they can handle.   The only ones left out of the customer rush are Anna and Emma, whose bracelets are priced a bit out of most regular folks’ price range.  Another factor is that Anna’s folded arms and stern face seemed to say “Don’t touch my stuff or I’ll kill you,” as Elizabeth reminded.

Business etiquette can be taught down the line.  For the 7 Little Johnstons, the possibilities for prom night and future prospects in small business seem bright