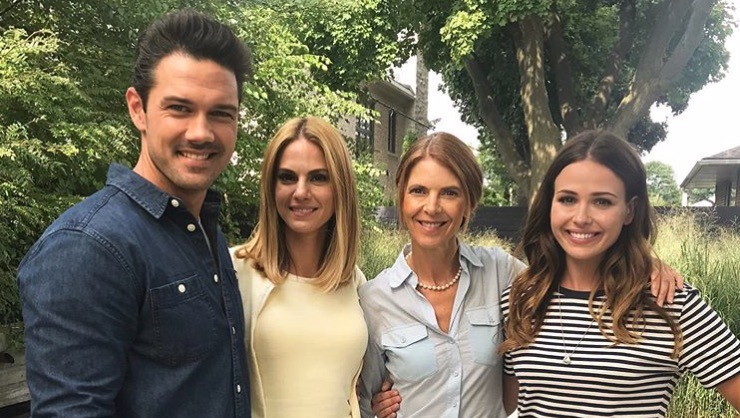 The highly anticipated Ryan Paevey romcom, From Friend To Fiancé, originally titled BFF Bride, is finally airing on Hallmark on Saturday, May 25. Ryan dished a bit more about this movie that he calls “super cute” and promises to be very romantic and very sentimental. What did the former General Hospital star reveal about the plot of this movie?

What is From Friend To Fiancé About?

Speaking to ABC Soaps In Depth, Ryan shared the storyline of the movie. He portrays Ted, who grew up overweight and was picked on mercilessly. Ted comes back to town, a successful businessman who is the whole package. He is all trimmed up and stunningly gorgeous, because he is Ryan Paevey. Ted comes back home and asks his best pal growing up, Jessica (Jocelyn Hudon), to be his “best woman.”

Who’s the bride? None other than the mean girl, Kimberly (Kelly Kruger). Ryan explained that “Jess is not super stoked about it.” “Everybody’s got a classic case of doing all the right stuff, for all the wrong reasons.” Does Ted pick the woman that he really loves, or does he continue allowing his pride to win? He has achieved something that seemed impossible when growing up. Now, the mean girl wants to be his bride! Ryan indicates that every character has a complex motive, and it sounds really fun!

“Everybody’s got a classic case of doing all the right stuff, for all the wrong reasons.”

They filmed this romcom in Toronto, working long days. But, Ryan explained that despite days that could last as long as 14 hours, they were all like “old friends” from day one. As a former soap star, multiple pages of script are not a big challenge for Paevey. Based on the preview, it looks like they had a lot of fun filming it! The journey of this movie took a long time, and fans cannot wait to see it.

From Friend To Fiance (formerly BFF Bride) airs May 25th on @hallmarkchannel!! Also airing on @schearthome On June 29th for my Canadians!! Here are some Bts pics and fun facts! 💕💕💕💕💕💕💕 This first pic was an actual selfie taken in the middle of a scene. It was our first day of shooting and it felt like we’d known each other for years. @ryanpaevey made matching necklaces for all the girls on set! He also did his first ever IG story thanks to yours truly, I’m not sure he’s done one since 😂 (Ryan’s fans will get this) @jocelynhudon and I still speak every single day since day 1 of this film. We shot the film in Toronto and it was actually my first time there even though I grew up in Montreal. Yes, that paint ball scene was as much fun for us as it looks in the film. The 3 of us went to soul cycle classes and picnics in the park when we weren’t shooting. The movie is adorable and we seriously had the best time making it. Hope you tune in!! I’ll be live tweeting with Ryan and will go live on IG 😘😘😘 KKB

How Can Fans See From Friend To Fiancé?

Usually, when Hallmark films a movie, it is out in a few months. From Friend To Fiancé promises to be worth the lengthy delay. Ryan Paevey fans know this will be worth waiting for. Originally, Hallmark decided that Super Channel Heart & Home would air BFF Bride later this year. Then, they changed the name of the romcom to From Friend To Fiancé. With the new name, Hallmark announced it would air on their channel on May 27, which is Memorial Day. Then, they made one last change and moved the movie premiere date to May 25 at 9 ET/8 CT.