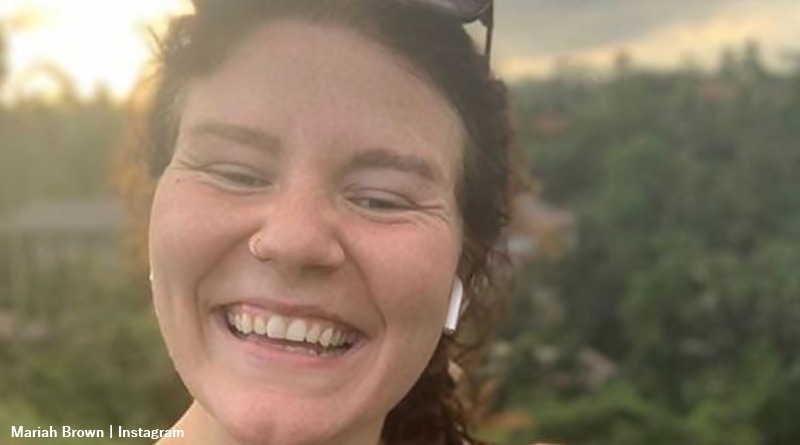 Sister Wives fans asked Mariah Brown back at the end of April why she went to Bali. Keeping them guessing for around two weeks, a couple of days ago she said she was doing teacher training. Finally, on Monday night, she posted up her Instagram stories and revealed she officially qualified as a yoga teacher while in Bali.

Fans of Sister Wives often feel some concern for Mariah. Actually, despite her announcement that she and Audrey got engaged, she still talked about her mental health issues. In fact, she mentioned going for counseling to cope with it. Of course, that’s a very wise decision. But, it looks like she did more than that and planned a trip to Bali.

The next thing we saw, was a photo of her in Bali on April 29. She just captioned it with, “Hello from my sweaty self + Bali🧘🏻‍♀️.” Lots of fans asked her why she was there. Some wanted to know if she went there on her “honeymoon.” Others presumed she went for a holiday and offered advice on where to eat and what to do. Actually, she noted that she went to Ubud, Bali, Indonesia. Therefore, others hoped that she would fly to Australia just three hours away.

Hello from my sweaty self + Bali🧘🏻‍♀️

Mariah teases fans about Bali, not revealing why she went there

Her next photo showed Maria standing in a yoga pose, looking fantastic and that one, she captioned with, “Feeling so full up on cacao, love, and good conversation with new friends. Bali has been so good to me🌿🧘🏻‍♀️” Of course. more questions came, with some fans of Sister Wives worrying she maybe moved there permanently. By not saying much Mariah actually teased her fans about why she went.

However, Janelle Brown hinted at Mariah being in Bali to do yoga when she wrote, “Super excited to do a yoga sesh with you!” So, fans assumed she went on vacation and did a bit of yoga in Bali, which seems like a great idea. Actually, others wondered where Audrey Kirss was. Actually, it’s unusual for them not to feature together in photos. One fan suggested Audrey just stayed behind to look after the dogs.

Feeling so full up on cacao, love, and good conversation with with new friends. Bali has been so good to me🌿🧘🏻‍♀️

Finally, on Mother’s Day weekend, Mariah posted up a photo of her in an awesome stream with a waterfall plunging down. She finally revealed to Sister Wives fans that she went to Bali for yoga teacher training. She wrote, “Yoga is more than movement & breath; it is a connection, it is union. During my time at teacher training, I’ve learned many profound lessons about myself. But equally as important, I’ve also developed a deep connection with this earth, with the waters that flow through it. Today was healing, in ways, I don’t know how to express. Forever giving thanks to this beautiful earth we get to call home & for the water that gives us life.”

The secret that she went to Bali for yoga training was out. Of course, many fans were thrilled that she looked good, and seemed much more relaxed than usual. However, taking to her Instagram Stories Monday, Mariah revealed that she actually qualified as a teacher.

Bali, Indonesia is probably the most authentic place to qualify as a yoga teacher

It looks like Mariah Brown’s dead serious about her yoga teacher qualification. After all, Bali in Indonesia is about authentic as it gets when it comes to the physical/spiritual art. Certainly, on her Instagram, it seems that Mariah found something beautiful, and a lot of personal peace. Hopefully, the Sister Wives star soon returns to Chicago and starts teaching others all her secrets.

What do you think about Mariah Brown going all the way to Bali to learn to be a qualified yoga teacher? Would you go to her lessons if you got the opportunity? Sound off your thoughts in the comments below.

Remember to check back with TV Shows Ace often, for more news about Sister Wives.