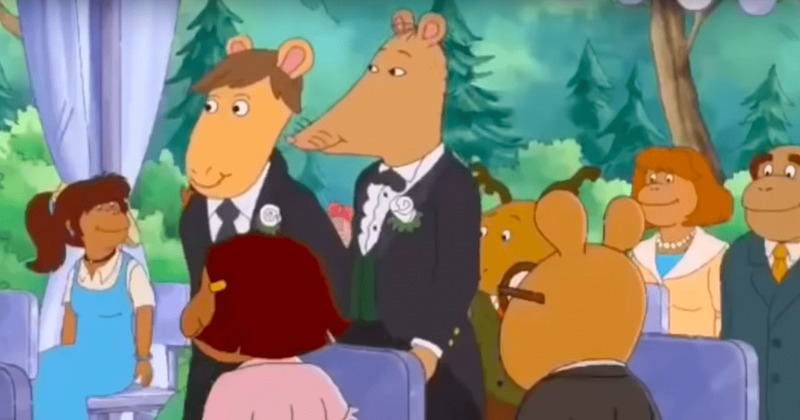 The Season 22 premiere of Arthur aired on PBS yesterday. The new season of the children’s series kicked off in a major way. The episode featured a longtime character coming out of the closet.

Titled “Mr. Ratburn and the Special Someone,” the episode kicks off with Ratburn discussing flower arrangements on the phone while passing out a pop quiz. After learning their teacher is getting married, Arthur, Buster, Muffy, and Francine go on a mission. They become committed to learning who Ratburn’s “special someone” is.

Through spying, Arthur and his friends conclude he must be marrying a bossy female rat. Disliking the female, the children decide to crash the wedding. They wish to save their teacher from marrying such a horrible person. After speaking to her during the wedding, the children learn they were mistaken. The bossy female reveals she’s actually Ratburn’s older sister.

When the episode transitions to the wedding, the children decide to sneak into the wedding. While their grown-up disguises don’t keep them hidden long, they don’t give up. They still wanted to know who the bride was.

It is not until Mr. Ratburn headed down the aisle that Arthur and his friends finally complete their mission. They watched as Ratburn walked down the aisle with his arm linked to his future spouse.

After flashing a wink at Ratburn’s students, everyone learns the bride isn’t a bride at all. Ratburn’s “special someone” is actually a groom. A male aardvark named Patrick.

As Deadline affirms, the Season 22 premiere of Arthur features nothing but acceptance for the same-sex couple. In fact, there is only one small thing Arthur’s friends take issue with. They regretted having to watch their teacher dance.

With the Arthur Season 22 premiere containing such a huge bombshell, it didn’t take long for the internet to react. One Twitter user jested Mr. Ratburn wasn’t the biggest shocking detail. What many have admittedly found surprising is that Arthur is still on the air.

I think the biggest surprise about Mr. Ratburn from Arthur being gay is that I'm just now finding out that Arthur is still coming out with new episodes.

Some insisted the decision to make Mr. Ratburn gay for the Season 22 premiere of Arthur was truly courageous.

It turns out Arthur is more courageous and explicit than Avengers: Endgame when it comes to LGBTQ2 lives and storylines. Congrats Mr. Ratburn! Your move, Marvel…. https://t.co/eq99SerHaC

Some Twitter users agreed the unquestioned acceptance of his students made sense. The age group watching Arthur is young enough to not care about a character’s sexual identity.

With thousands of individuals discussing the new season of Arthur. There are a few viewers who took issue with the decision to make Mr. Ratburn gay. Some insisted they wouldn’t let their children watch the PBS series anymore. The negative comments, however, are far and few between.

The third episode of Arthur Season 22 airs tomorrow only on PBS.

‘Welcome To Plathville’ Preview: Will Olivia Stay Or Go?
‘Teen Mom’: Jenelle Evans and Daughter Ensley Involved In Car Crash
Another ‘Bringing Up Bates’ Courtship May Be Brewing: See Photos
Is Kendra Duggar Strapped For Cash After ‘Counting On’ Cancelation?
Tayshia Adams Dishes Reasons Clayton Echard Would Be A Great ‘Bachelor’