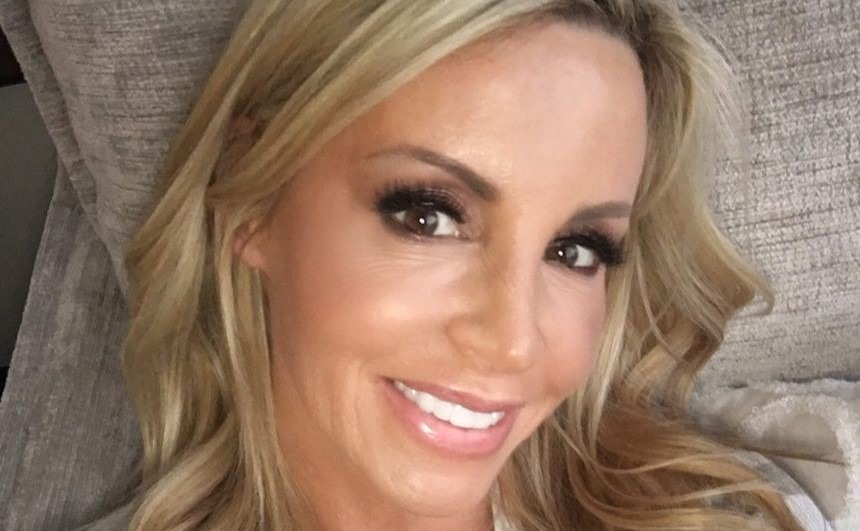 The May 7th episode of Real Housewives of Beverly Hills was virtually free from the “Puppygate” drama. The entire show was about a camping trip Camille Grammer (now Meyer,) Kyle Richards, Dorit Kemsley, Lisa Rinna and Teddi Arroyave Mellencamp took together. Estranged co-star Lisa Vanderpump wasn’t on the trip or even in the episode at all.

The real drama happened on Twitter a few days later when Camille tweeted her agreement with a fan who said that she was the “new target” of the ladies, especially Kyle, once Lisa Vanderpump refused to film with her co-stars. The tweets have since been deleted, but you can read them here.

Camille at The Real Housewives of Beverly Hills Reunion?

In the same tweet, Camille said she would “pass” on the Real Housewives of Beverly Hills reunion. She thinks the other ladies will gang up on her. Her fans tried to encourage her to attend, but she was adamant against it. She also revealed that the other RHOBH stars get bonuses for attending the reunion while she doesn’t.

Perhaps Camille is bluffing in hopes of being offered a bonus, too. Season 9 isn’t even halfway over yet. Anything can happen between now and the reunion taping.

On Thursday, May 9, a fan asked, “When did Kyle go after Camille?” Kyle retweeted the tweet and added that she was just as confused as the fan. She went on to stay that she didn’t want to get in a social media feud with Camille.

I didn’t. I’m as confused as you. But I can’t even engage with how ridiculous this is. And frankly I have no interest in getting into a twitter war at my age.

Camille had posted “that’s right , I said Teddy is a know it all” and Teddi responded “it’s Teddi” I replied “mic drop 😳” that certainly does not warrant the tweets about me. But I am done trying to understand.

Camille clearly does want to start a Twitter feud with Kyle. A fan posted that the friendship between Kyle and Teddi was weird. Camille replied and called the friendship, “creepy.”

Camille also had a lot to say about Teddi. Or retweet what others said about Teddi because these adult women act like 12-year-old kids. In one reply, she refers to Teddi as  “Mean girl Teddi.”

She's even said that it was a waste of time going to Camille's wedding. That's beyond disgusting. How dare you belittle one of the most special days of Camille's life? Teddy is bad news & I hope Camille replaces her.

Another series of fan tweets centered around Teddi being behind Puppygate on The Real Housewives of Beverly Hills this season. Camille replies, “Teddi and that John B guy. SMH.” A lot of fans put the responsibility solely on Teddi and don’t believe her contention that Lisa Vanderpump put her up to it.

There was nothing right about 'bring out the dog' then saying LVP gave 'orders'. Teddi is just a nasty piece of work.

As viewers know, Lisa Vanderpump swore on her children to both Kyle and Dorit that she didn’t leak a story about Puppygate. Neither believes her. When a fan brought it up in tweets, Lisa replied that she didn’t care if they believe her or not.

It’s actually fine,I don’t care anymore if they don’t believe me.
I actually prefer it that way as it shows me what they really thought of me.
I’m good.BTW swearing on kids life is sacred where I am from

Real Housewives of Beverly Hills airs Tuesdays at 9 p.m. on Bravo. Check it out to see how the show handles Lisa Vanderpump’s refusal to film with her co-stars.