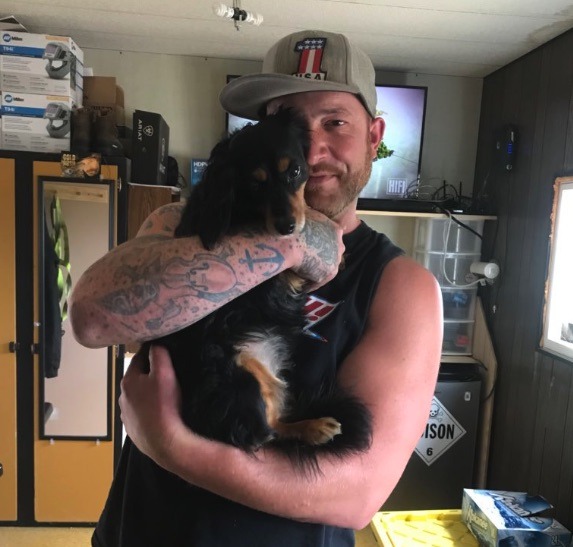 On Wednesday, Gold Rush mine boss Rick Ness shared a shocking post on social media. His late mother’s dog Rubi was attacked by a bigger dog on the claim. What do we know about Rubi’s condition?

The new gold mining season has begun and Rick Ness was on the claim, with his late mom’s beloved dog Rubi. Rick shared the shocking news that Rubi was attacked by a bigger dog, just a few days ago. Rick was not there, but his crew was. The unidentified bigger dog had its jaws on her neck and throat, but Rick’s crew managed to pry the bigger dog off of Rick’s small cutie. Rick revealed that his cherished pet has lacerations on her neck and on her throat, and although she is in pain, she is going to be ok.

“My poor Rubi was attacked by a big a****** dog. Thanks to the quick action from my crew it’s jaws were quickly removed from her neck but she did suffer some lacerations to her neck and throat. She is currently sad and in pain but the vet said she will be just fine.”

We don’t know who owns that dog that attacked Rubi. The Gold Rush dogs are generally loose around the claims. It should be assumed that these dogs should be socialized. To hear of such an attack has to be very shocking to all of the miners. There are enough challenges with gold mining, and the natural habitat, including bears and other animals,  to have to worry about fellow miner’s dogs!

My poor Rubi was attacked by a big asshole dog. Thanks to the quick action from my crew it’s jaws were quickly removed from her neck but she did suffer some lacerations to her neck and throat. She is currently sad and in pain but the vet said she will be just fine.. pic.twitter.com/NdVgiUKQJD

Rubi Is The Reminder Of His Mom

Last year, Rick lost his mom Judy to brain cancer. The miner, who turned 38 on March 5, brought the little dog up to the Yukon last year. He revealed that Rubi was his contestant reminder of what he wanted to accomplish last season. Ruby reminded him of his mother.

Rubi has clearly been a good luck charm for him. Ness and his freshman crew of miners were the first team to find 1,000 ounces of gold. Rick had put his house, his reputation and his friendships on the line for this gig. Rubi was always there to remind him of the big goal he set for himself. Now Rick needs to be there for Rubi, as she recovers from the horrible bites from the bigger dog.

On January 24, Rick posted on Twitter a photo of him and his late mom Judy. The heartbreaking caption read “Happy Birthday mom. You should have been 56 years young today. I miss you and I love you forever.” During Gold Rush Season 8, when working for Parker Schnabel, Rick took time away from the busy mining season to be with his aling mom. He had previously shared that his mom would love to take him out and show him off. She died in March 2018, with Rick’s face pressed next to her’s. Rick now has Rubi with him as a tender reminder of his beloved mom.

On the one year anniversary of her March 20 2018 death, Rick shared how he spent that day. His closest pals all made him a special meal, silently commemorating the important day. On social media, Rick revealed that afterwards, he got very emotional, but let his mom know that he was “ok.”

“On the 1 year anniversary of my mother’s death, my best friends all banded together, cooked me an amazing meal and without saying anything at all, reminded me that I have so much support and so much love in this life. I held my tears back until now but I am so blessed. I’m ok Mom.”

Happy birthday Mom. You should have been 56 years young today. I miss you and I love you forever. pic.twitter.com/RarFF9NbK2

What are your feelings about the dog that attacked Rubi? Please share your get well wishes for Rick’s little dog in the comments field. Gold Rush has not officially been renewed. Fans should not worry as the miners are sharing posts from the claim. Besides, Gold Rush is Discovery’s number one rated show. Gold Rush Season 10 should begin airing on Discovery sometime in October. TV Shows Ace is the place for all of the lates Gold Rush news.