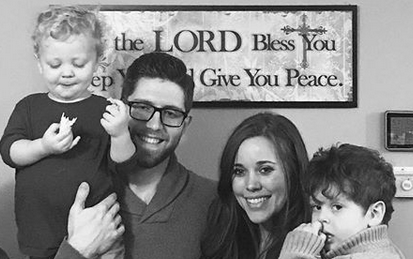 Celebrities are no stranger to criticism from people all around them. Living life in the spotlight gives stars lots of attention–some good and some bad. Members of the Duggar family often get plenty of attention from their fans and others.

When it comes to how celebrities raise their children, they get even more negative comments from fans. One Duggar, Jessa, is known for clapping back at rude commenters on her social media posts. She always knows just what to say to shut them down. She’s even stuck up for her sisters a few times too.

Jessa recently shared an Instagram post of her two sons, Spurgeon and Henry, playing outside in the mud. Her caption says, “Good clean fun.” She posted a few pictures and a video of the boys getting all muddy and having a fun time.

When a fan asked about the boys playing a game outside, Jessa explained what they were doing and said, “They have two of them. It was a game Jana made for a party. The hoops were placed on a little table. Kids lined up in two teams standing about 10 feet back from the hoops. Each team member took a turn grabbing a bottle of bubbles, blowing one, and then running along behind the bubble, puffing and blowing it along until it went through the ring. The first team to have each kid get a bubble through the ring was the winning team!”

What are fans saying about this post from Jessa Duggar?

Most people would assume that Jessa would get a lot of backlash for the mess that her kids are making or for letting her kids be outside without shoes on like she has in the past. In reality, fans responded completely differently. They actually love how Jessa is raising her kids.

In the comments section, fans said:

Of course, there were a few negative comments here and there, but most of the comments were very positive and encouraging. Fans seem to think that Jessa is doing something right while raising her two sons with her husband Ben Seewald.

What do you think of Spurgeon and Henry’s fun day outside in the mud? Let us know in the comments below!

For more updates about Counting On and your other favorite TV shows, don’t miss the updates from TV Shows Ace!