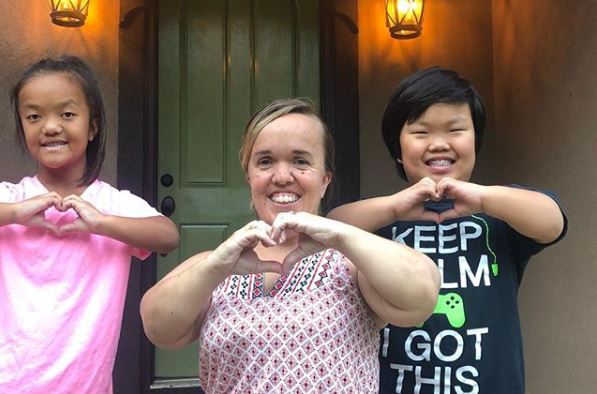 The Johnston family is challenged in stature but has never run short on truth.  Whether confronting dilemmas of growing up or growing out of their fixer-upper home, Trent, Amber and their children have been willing to share their challenges with the world on their show 7 Little Johnstons.

Last week, Trent and Amber Johnston shared their most vulnerable moment yet in Valentines or Broken Hearts.  After 24 years together and 20 years of marriage, the devoted pair admitted their need for help and intervention in parenting.  Amber especially wants support in dealing with Anna, and Trent wants to develop more positive approaches with Jonah.

The family could not have found a better fit than with Dr. Galen Cole, who has raised five children himself, along with being an esteemed psychotherapist.

This week, on 7 Little Johnstons May 7’s Episode 6 for Season 6, Picture Them Naked, Dr. Cole includes the whole family in a “working” session playing a game of pool with horses.  As soon as he gets out of the van, Alex notices the poop on the ground, but there is an abundance of purpose in this unconventional game.  Emma learns to speak for herself in a big way, too.

Taking a shot with a trot on 7 Little Johnstons

Elizabeth Johnston had worked with horses before.  She described that she had the experience to  “feed them, wash them, and ride them,” but never imagined going to therapy with them.  She and her whole family were about to master some hands-on learning from players with hooves.

Dr. Galen designed a game of billiards, with the horses being the “balls” and each member of the family taking turns being shooters to coax the horse into “pockets” of PVC pipe.  He explained that the animals were not to be touched during play and that the only person allowed to talk was the designated shooter.

It didn’t take long for Alex, Anna, and Emma to discover that this game was no cinch.   It took advice from Elizabeth to help her family realize that they needed to work together to move the horses.  This wasn’t like “calling a dog” as Alex observed.

Elizabeth also suggested changing the pockets of, which immediately prompted Trent to jump in with Jonah to redesign the pipes.  Anna already felt pulled one way by Jonah and another by her dad.  It was a perfect example of how difficult things could get at home.

Amber verified that usually, her husband would simply “lay down” what was going to happen, and that would be that.  The older siblings all offered ideas on how listening and giving feedback would create a better situation.

Working together to score, the family soon had success in getting the equine shots in the pockets.   Dr. Cole spoke with Trent and Amber privately, and Trent admitted that the ways he was raised didn’t allow for much listening, and he was willing to make a change.

Another way that Dr. Cole wanted to see change was and how the family treated Emma.   Emma endeared herself to the Johnstons even before her journey from China.  Because she did not speak English, “she would look up at us and smile so sweet,” gushed her dad.  All the family began to fulfill her needs without her saying the word, and that further hindered her speech.  When Emma did master English, she lost her native Chinese, and the transition made her more hesitant with communication.

“You want her to be resilient,” insisted Dr. Cole.  Trent even wanted to change Emma as the shooter at one point, rather than letting her try her shot with the horses alone.  Elizabeth partnered up with her to participate.

Trying and failing is part of life for everyone and an invaluable lesson for children.  Emma is so fearful of failure and ridicule that she has surrendered her voice.   The Johnston family finds a way to let her speak in a big way, too.

Emma is knocking it out of the park as a cheerleader through two basketball games, with no signs of being a shrinking violet.  Amber gets a call from Cousin Melanie, asking the family to be the keynote speakers at an event for physically and cognitively challenged high school students.  The Johnston’ s frequently accept such engagements. They know that their experiences and example are tremendous lessons beyond anything in the classroom.

In a family meeting, the loving support and the hard truth for Emma come out.  No one is going to speak for her any longer, no matter how long it takes for her to find words.  She is going to express herself, and the first test of that will be as the closing speaker at the “I CAN” event.

Even though this transition in tough love, it was beautifully touching to see Emma’s siblings tenderly stand by her, even with tears and a runny nose.

In preparation for the big speech, the family visits speech therapist, Dr. Tiffany Scandrett.   Dr. Tiffany instantly connected with Emma, and everyone laughed the family practiced tongue twisters and licked lollipops with their tongues in different positions.   At one juncture, Dr. Tiffany deliberately scooted her chair to block mom from Emma’s view.

Even though Emma wasn’t willing to do a cheer, the therapist stressed that gaining confidence takes time, and practice is essential.   The session ended with a big hug from Emma.

The day of the speech, each of the family spoke from the heart.  Amber opened with some of the misconceptions about Achondroplasia Dwarfism.  She described the “M-word” like hate speech and focused on the similarities and abilities of those with challenges over the differences.

Trent offered his focus on employment helping employer see abilities instead of only the stature and unique needs of a person with special needs or a little person in particular.  Elizabeth gave her perspective on her recent breakup and advice on dating.  Anna openly admitted her past struggles with discipline and rules.

Jonah explained that turning 18 isn’t a turn-key to maturity, but just a beginning.  Alex elaborated on his issues with anxiety as well as dwarfism.

The nerves were visible on every face of the 7 Little Johnstons when it was Emma’s turn with the microphone.  There was a long pause, and Emma had the best opener ever.  “Guess what guys– I’m scared,” she started, and the audience was in the palm of her hand.