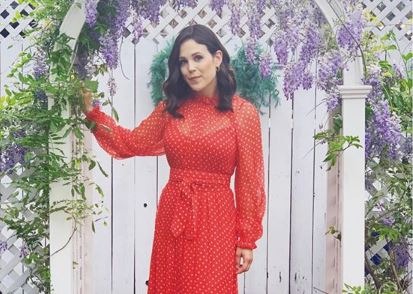 Erin Krakow constantly endears herself to When Calls the Heart fans with her portrayal of the plucky, positive, and resilient teacher of Hope Valley, Elizabeth Thornton.  Season 6 of the Hallmark Channel’s most popular scripted drama ever has Erin Krakow’s character juggling more balls in the air than ever.  She has returned to her calling of teaching full-time while caring for her precious son, baby Jack. He is portrayed by twins, Lincoln, and Gunnar Taylor. She does have a babysitter to help, though. At the same time, Elizabeth is very committed to being an integral and active member of her community, always making time for others.

Loyal viewers have already fallen in love with the darling stars who share duty playing the one and only on-screen son of Erin Krakow. No one can help but to notice that baby Jack is growing up quickly—already.  Even considering the sleepless nights that Elizabeth was enduring in the May 5 return episode, Heart of a Mountie, no mother of an infant wants to miss any single milestone.  She went to school blessed one morning, just after experiencing a giggle from her son.

Erin Krakow dropped in on Home & Family on May 3, with the full video posted May 6. She shared some romantic highlights for When Calls the Heart in Season 6 and 7. Erin also revealed some of her secrets for dealing with the beautiful twin boys on the set.

Keeping a bag of tricks

Erin Krakow was excited to introduce the new Mountie of Hope Valley, Nathan Grant, to the legions of loyal When Calls the Heart viewers. The Juilliard-trained actress had to confess that her favorite co-star to share scenes with lately is either one of the Taylor twins.

She never tried to hide that “my favorite– getting to spend time with baby Jack,” is the best part of her day on set.  Co-host Cameron Mathison, praised “You’re so good with them,” before transitioning to a preview clip depicting Nathan Grant rushing to solve Hope Valley’s first robbery.  Even though Erin Krakow complimented the twins as “very cooperative,” there are times that every actor working with children and babies needs a supply of soothing techniques to restore calm and capture those precious smiles.

Just as every mom knows the go-to method to help her upset child, Erin Krakow learned the tools of the trade with caring for children as a Nanny during her acting study and was constantly on call as a babysitter after hours.

“We have a lot of little toys on the set, and we’ll hide one and shake it for the baby,” Krakow described.  The 34-year-old demonstrated her comfortable rocking stance, saying that “I do a lot of singing– I do a lot of shhuush.”

In TV land, though, there’s always the option that, “if one is not working out, we just swap it out for the other one, and then we’re good.” If only every parent could have stand-in children in the wings.

Holding these two in my arms as long as they’ll let me!
Thanks for the visit Lincoln & Gunnar!#Hearties ❤️ Baby Jack! pic.twitter.com/r2ZFhn8EHu

When Calls the Heart is allowing love to rule through Season 6.  Paul Greene and Andrea Brooks are irresistible as Dr. Carson Shepherd and his nurse, Faith.  A passionate kiss in the middle of town has already given all the announcement needed for these two.  Jesse (Aren Buchholz) and Clara (Eva Bourne) have been blessed not only to be reunited in love but also by the unexpected sale of their land for more than double the price. This allows them to start a life together on a more solid footing.

Erin Krakow assured that Elizabeth will find love, but Season 7 will be her character’s year to open herself to that “possibility” again.

Elizabeth summoned the courage to introduce herself properly to Nathan Grant, and inspire him with her own personal story of coming to Hope Valley.  She also was courageous enough to confront Lucas Bouchard over a misunderstanding of teaching gambling to a 10-year-old.

For his part, the new Mountie has made it clear to the saloon owner that he doesn’t think a magician and a card player is a “good fit” for the community.  Chris McNally perfectly embodies the look and the charms of Lucas Bouchard.  Lucas also made it clear that he has no intention of leaving.  The mystery man has a lot of history yet to unfold, and Elizabeth may be at the center of a showdown between the two newcomers.

Like her talents with children, Erin Krakow only has to look within to find things in common with her When Calls the Heart character, and she already has love on her horizon.

Jarrod Schulz Wipes ‘Storage Wars’ From Instagram: Off The Show?!
Candace Cameron Bure Puts On A Leggy Display At The Poolside
‘Extreme Sisters:’ Why Do Patrix & Patrica Want To Move To Orlando?
WOAH!!! Sabrina Burkholder Stuns With Before & After Picture
Is It Too Late For Jill & Jessa Duggar To Sue Josh For 2002 Molestations?