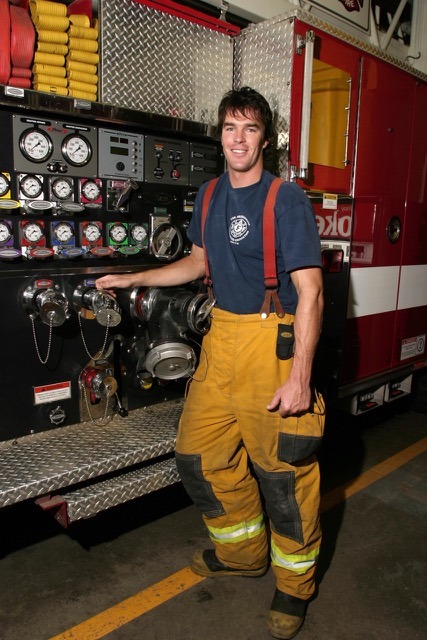 Mondays are so much better when they end with The Bachelor/ette. After surviving two full months of nothing to watch on Monday nights, it is finally time for the Bachelorette Reunion: The Biggest Bachelorette Reunion in Bachelor History! (8PM-10PM EST on ABC-TV) Trista and Ryan Sutter are one of the favorite couples from this show.

This evening we will be reunited with 12 of the 14 former Bachelorettes. Only Meredith Philips (Season 2) and Jen Schefft (Season 3) were unable to clear their schedules to appear on this special celebrating 15 years of The Bachelorette.

On the premiere season of The Bachelorette back in 2003, Trista fell for hunky firefighter Ryan Sutter, who proposed during the finale and tied the knot in the franchise’s first-ever televised wedding, broadcast as a mini-series, Trista & Ryan’s Wedding.  The pair who have been married for 15 years have a love story that every Bachelor franchise contestant aspires to replicate.

Thanks to a safety campaign Ryan Sutter is working on with BIC Lighters, TV Shows Ace was able to exclusively ask Ryan the following questions:

What do you think of the changes the show has made the last few years, being more focused on drama and less on love?

I am fine with the changes overall.  They are changing with the times and keeping up with what people tune in for.  I believe the underlying theme of finding love still exists, it’s just mixed in with a few other, more dramatic, themes.

Would you have jumped a fence (or done something equivalent like run into a burning building) for Trista if she had behaved like Cassie did?

I absolutely would have done the same.  I believe that Colton needed to sort things out – something that is nearly impossible within the confines of the show.  I’m glad he had his priorities straight and did what was best for him.  Ultimately, I believe it also made for a better, more authentic show.

Connections. They are what make this life worth living. ✨ At least to me. In the past 16 years, I’ve gotten the chance to connect with so many beautiful humans who shared a crazy, untraditional, unique experience and last night, two more were added to a list that thankfully, continues to grow. Love you @cassierandolph and @coltonunderwood and thank you @bachelorabc and @bacheloretteabc and @Tubi for keeping the connections coming! ❤️❤️❤️❤️ #thebachelor #thebachelorette #ilovelove #watchusontubi #tubitheapp

Should Hannah B. lead with her heart or her head?

I have always followed my heart.  I think often times we can overthink ourselves out of the things that are best for us.

Have your kids, Maxwell, 11, and Blakesley, 10, watched your season of The Bachelorette?

They have not.  Trista and I have discussed watching it with them in order to provide context and explanation to what they might see.  They will probably watch it eventually so we’d like to control that as much as possible.

What is Ryan up to now?

Are you still working as a fireman? If not, what are you doing these days?

I recently teamed up with BIC Lighters. I retired from the fire service last June after 17 years and I obviously still care about fire safety. There are many non-BIC lighters out there that aren’t safe. So I wanted to share some simple tips about what to look for and how to talk to your kids about this stuff. I’m also currently working for a custom home builder – Vail Custom Builders – and own a share of a small coffee roaster, Bearded Man Coffee.

So get comfy, pull your hair in a ponytail, order in a pizza, open a bottle of wine, maybe light some candles (here’s the link to those fire safety tips Ryan wants you to adhere to)  and enjoy the Bachelorette reunion tonight. Next Monday kicks off Hannah B’s season as The Bachelorette. Will she get as lucky as Trista did?