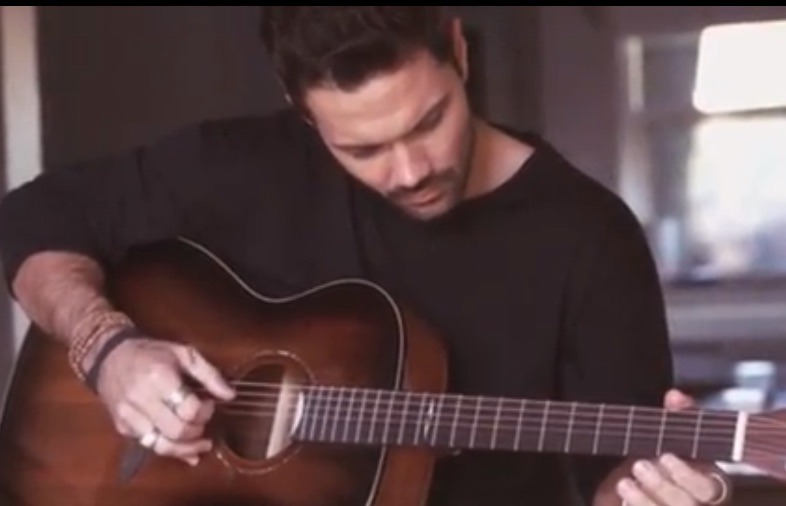 Ryan Paevey has been wearing a cowboy hat and riding a horse for his new movie Dude Ranch. Now, it looks like Ryan is spending his lunch breaks serenading a young Hallmark star with his gentle guitar playing. Could Ryan be playing guitar in the highly anticipated Hallmark movie?

Recently, on Instagram, Ryan Paevey posted that he was playing guitar and even giving some lessons to his young Dude Ranch co-star Ava Grace Cooper. Ava looks fascinated with the performance by the cowboy hat wearing, Hallmark hunk. Ryan has been sharing videos of his guitar playing on social media, hashtagging it #HallmarkUnplugged.

Could he possibly be playing some guitar on Dude Ranch? That seems like a good possibility. This is a cowboy movie, and there is nothing more cowboy-like than a guitar around a campfire! It doesn’t appear that Ryan has ever brought a guitar on set before, so the probability of him strumming a song for Dude Ranch seems very possible. It would be so great if fans could hear Ryan perform in the movie, not just on social media posts, from lunchtime breaks.

Lunchtime concerts in the park with the tiny rockstar. 🤘🏽🤘🏽#lifeofadventure #imnotverygoodbutshesverysupportive #hallmarkunplugged

Ryan Paevey Is A Renaissance Man

Longtime fans of Ryan Paevey know that the talented actor has many layers. He creates handmade jewelry, including beautiful pendants and rings, under his personal Fortunate Wanderer label. Everything Ryan does is part of his journey of artistic discovery. He enjoys working with his hands, trying new things and embracing life. His zest for adventure and artistry are evident in his acting. These are just some of the reasons why he has a growing legion of fans who are following everything he does. His obvious love of guitar playing has added another, more sensitive dimension, to this very talented actor’s skillset.

What Do We Know About Dude Ranch?

Dude Ranch is about Richard (Paevey), a property developer from the city who wants to build up the Montana land where a ranch currently resides. Erin Krakow portrays Samantha, who owns the ranch. Sparks are destined to fly, in this Hallmark movie written by Robert Tate Miller. Ava Grace Cooper portrays Annie and appears to be living with Samantha. Is she Sam’s daughter? Will Richard serenade Annie with his guitar playing? We will have to watch to find out!

According to director David Winning, filming is nearly complete. The lush setting is in Abbotsford and Surrey, Vancouver, British Columbia, and it looks absolutely breathtaking. Winning shared a photo of a tranquil nature path where the crew was filming, and Ryan shared a photo of a stunning waterfall. it is clear that everyone is loving the stunning scenery. Dude Ranch is part of Hallmark’s Summer Night series and is slated to air on August 24.

Do you want to see Ryan Paevey play guitar in Dude Ranch? Are you looking forward to his first cowboy movie? Please share your comments below.  Currently, Ryan Paevey can currently be seen on BET’s new drama, Games People Play Season 1. May appears to be a great month for Ryans fans as Hallmark’s From Friend to Fiancé will finally be airing on May 27. Dude Ranch will air on Hallmark on Saturday, August 24.