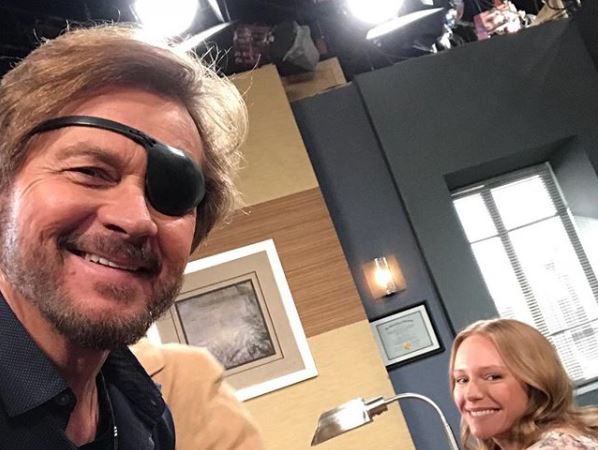 Days of our Lives fans will rejoice to know that Stephen Nichols will be resuming his role as Steve “Patch” Johnson later this year. Soap Opera Digest broke the news earlier with an exclusive interview with the actor.

He told the magazine that he got a call a month ago to come back and he was more than willing. He was mum on any details regarding Steve’s return. We know Days tapes at least six months in advance, so the earliest he would be on-screen is September. Maybe he will be a big return for a ratings-grabbing November sweeps storyline.

There’s no word on how long the actor or his character will stick around this time. Stephen previously came back for a short stint in August of 2018. At the time, he posted to his Instagram that he had no warning that he was being written out. Despite the shoddy behavior by the NBC execs, he expressed his adoration for his fans and co-star Mary Beth Evans (Kayla.)

For me, Days of Our Lives is home and I want to be there … I love the people, I love Steven Earl Johnson and I love what Mary Beth and I have been able to create together. I was excited to see what this new team would bring for us and for all of Salem. I’ve been in this business long enough to understand the rotation of stories, and I get that we can’t always be at the forefront. And despite my disappointment in the lack of story this past year, I’ve always worked hard and we’ve always tried to find the moments in whatever we’ve been given. I think we did that. Whenever I see a scene or montage you guys post, I am so touched and I remember just how much story we told for so many years and how rich it was. I’m so grateful for that. And I know that there are still years of Steve and Kayla’s story left to be told. I hope we get to tell that story. Your unwavering support tells me you hope that too. Thank you and much love, Stephen #Days @marybeth.evans #patchandkaylaforever

Where Has Steve Been?

Steve departed the show off-screen when he was arrested for espionage. He has been on the run trying to find out who framed him and clear his name so he can return to Salem. Newly appointed Salem D.A. Ted Laurent (Gilles Marini) was involved in Steve’s arrest.

Kayla has mentioned a few off-hand remarks about talking to Steve on the phone. He is working with Shane Donovan to prove he didn’t commit espionage. Steve and Kayla are one of the original soap opera super couples from the 80s. They are still popular today, though soaps prefer to focus on the younger couples.

Will Steve Help Jack Remember on Days of Our Lives?

Steve is siblings with Jack Deveraux (Matthew Ashford) and Adrienne Johnson (Judi Evans.) For many years, the writers on Days of Our Lives have missed the opportunity to create scenes together for the three of them, despite each of the actors being beloved by the fans.

Kayla did call to inform Steve that Jack had survived the elevator crash. Since Steve is a wanted man, it makes sense that he wouldn’t come rushing home. But maybe seeing Steve will trigger something in Jack’s memory to end his amnesia.

While he has been on the lam, Steve also missed his son Tripp’s (Lucas Adams) wedding to Haley (Thia Megia.) Perhaps Steve returns to help Tripp find a way to keep Haley in town.

Tune in to Days of Our Lives weekdays on NBC to watch Steve reunite with his family.