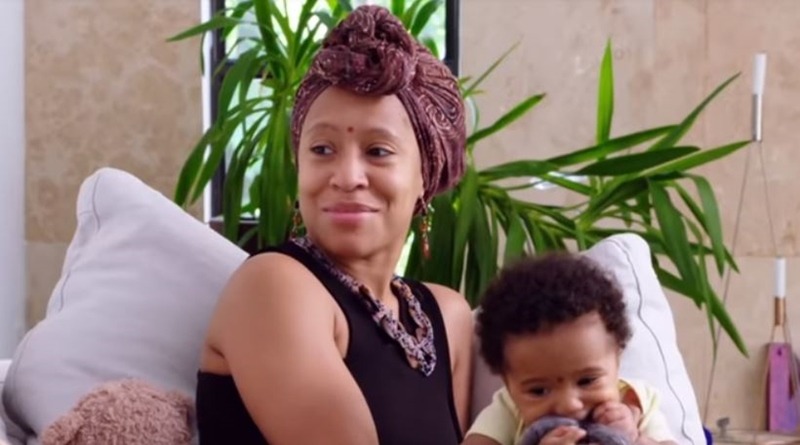 Seeking Sister Wife followers know that Ashey Snowden and Dimitri practice some spiritual faith. In fact, sometimes, because she put a red dot on her forehead, she got called out for cultural appropriation. However, it turns out the dots’s not theft from any human culture but is linked to her superpowers.

Taking to her Facebook account, Ashley posted up a very long blurb explaining why she has supernatural superpowers. Apparently, it all revolves around that dot on her forehead. Actually, it turns out as a third eye named “The All Knowing Eye.” She said that she sometimes reposts her theories on intuition. She expands on the “bindi/udjat/third eye/ajna.”

She explains that now we may see her with stripes or dots. “I wanted to merge my golden year of seeing 33 suns on this planet with the magic of the number 7— which is the number of spirit and inner wisdom. This is my rebirth year, which is a huge celebration, blessing, and accomplishment. I wanted… fun with adorning and there are lots of options available now.”

What are Ashley Snowden’s superpowers that make her special?

Ashley Snowden tells us she developed her “clairvoyance, clairsentience, and clairaudience” powers. In fact, she managed this through her “Angelic Guides.” The sister wife explains that those of us without supernatural knowledge think of these powers as “intuition.” Or, you may think of it as “gut feeling.” Ashley adds that people often miss out on “formal instruction that supported nurturing this superpower.” However, she notes she struck gold with her mom who influenced her. She does well with “intuition,” “witchiness,” and, “manifestation.”

Ashley also says that sometimes she forgets to pay attention to that supernatural power. That’s when she “pays for it with confusion or regret.” One can’t help think the name, “Vanessa Cobbs” here! Anyway, the best thing of all, the Seeking Sister Wife star tells us, is it’s never “too late.” Anyone can “increase [their] supernatural powers.” It’s all about toning up spiritual muscles.

Ashley’s long post sits on her Facebook page for fans of the Seeking Sister Wife series by TLC.

What do you think about lucky Ashley Snowden being endowed with supernatural superpowers? Would you like to get the powers? Sound off your thoughts in the comments below.

Amy King Reveals Son Daxton Has A New Modeling Gig – Photos
Jeremiah Duggar’s Rumored Girlfriend Deletes Courtship Evidence
You Can Book A Stay At The ‘Welcome To Plathville’ Home – Here’s How
Will There Be A Season 2 Of Netflix’s ‘Ginny & Georgia’?
Courtney Waldrop Gets Unusual But Exciting Birthday Gift