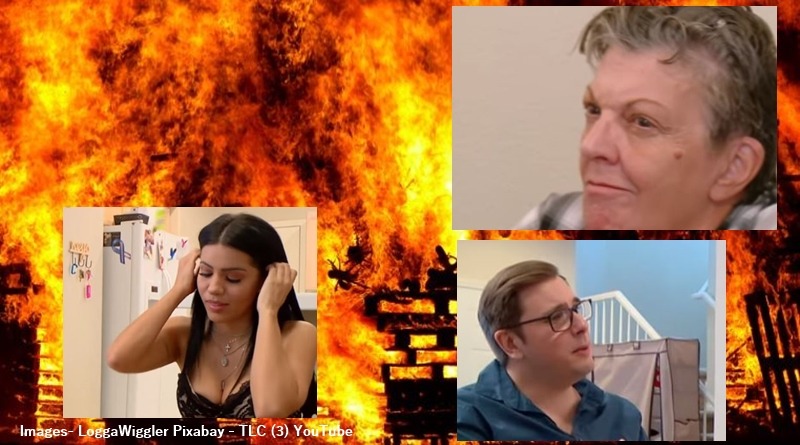 90 Day Fiance: Happily Ever After? premiered Sunday night and we saw a lot of scenes from 90 Day Fiance Season 6. In fact, there seemed way too many recaps all around which irritated viewers. Nevertheless, the Colt and Larissa story seemed to gain her more favor among fans who previously hated on her.

During the premiere of the show, we pick up where they had a big fight and it all ends up with her getting arrested. Actually, it was Colt who called the cops on her and she landed up in jail for two days. Unbelievably, Colt suggests he only called the cops to “protect her.” Anyway, they still married which means loads of drama, shouting, arguments, and super-angry Momma Colt(ee).

Larissa blames Colt for all of the drama. Colt drops the assault charge but that’s too late for Larissa who has to consult a lawyer. That’s when she finds out that Colt lied to her when he said he told the cops nothing about her. In fact, he told them that she attacked him. Larissa clarifies to the lawyer that they started fighting because Colt didn’t want to marry her. The lawyer tells her she could be deported.

Cutting it short, Colt says, “I regret calling the police because now everything has changed…and the trial is taking a toll on our relationship.” He says sorry for calling the cops.

So, Larissa’s rightly pissed and tosses Colt’s wedding ring down the toilet. Larissa asks where Colt’s wedding ring is and he says, “My ring is just off my hand,”  which prompts the same question from him to her. Of course, the ring’s in the toilet and Colt’s mom gets enraged- no surprise there. Fans of 90 Day Fiance think no woman will ever be good enough for her son.

A lot of the anger in this relationship involved the injection of thoughts and ideas into Colt’s head from his mom. He seems very much under his influence. And, Debbie does not like Larissa in the slightest. Actually, at the end of the segment, we hear Larissa saying, “I feel deadly afraid,” because “If they hear something that I’ll say, my life will be hell.” Actually, it’s very evident there’s something wrong in that Colt-Momma-Larissa hate fest. Maybe Larissa really should fear Colt and his mom.

90 Day Fiance: Happily Ever After? fans swing some approval Larissa’s way during the premiere

Fans of 90 Day Fiance usually stick to their favorite couple, and their least favorite. Colt and Larissa got a lot of hate as Colt projected himself as the nice guy, stuck with a ‘crazy.’ And, let’s face it, the show slanted that angle with Larissa’s fiery temperament to the fore of almost every scene.  But, considering what went down, in hindsight, Lasissa gained a bit more approval. Here’s what some followers said about it across social media like Twitter, Reddit, and Instagram:

What did you think about Larissa after watching the premiere? Do you feel a bit more in favor of her, now in hindsight? Shout out your thoughts in the comments below.

Remember to check in with TV Shows Ace often for more news about 90 Day Fiance: Happily Ever After?

Kendall Jenner On Her Hands And Knees At Met Gala
Tyra Banks Defends ‘DWTS’ Season 30 Controversial Casting Choice
‘BIP’ Natasha Parker Is Moving On, Saying Goodbye To The Past
‘Bachelor In Paradise’ Kendall Long Reveals Why She Joined The Show
Savannah Chrisley Admits Todd Bribes Her To Hide Secrets From Julie