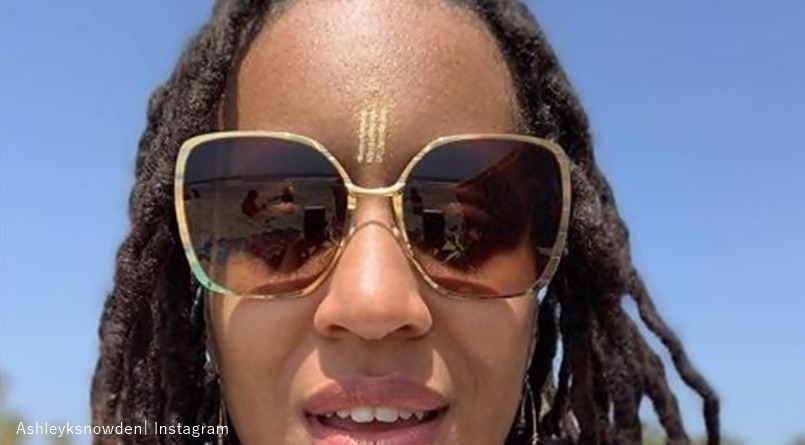 Seeking Sister Wife‘s Ashey Snowden went to her Instagram a few days back and posted what looked like a moving story about her godmother. She asked people to send her money for her business venture that she started up from scratch after fears of homelessness. However, maybe she got some blow-back from followers because since then she removed all her IG posts.

Sarcasm noted the post, got all the details and spread the story around, lauding Ashley for her “inspirational story.” They then screen-capped and posted up where people could send money to. These included Venmo, PayPal, and CashApp. In her post, now removed, Ashley explained that they had to help Jewel download the apps so people could send money. She said, “I give thanks to each of you who will find it in your spirit to bless her.”

The basic gist of the story is that her godmother’s in Jacksonville, Florida where she recently opened a wellness salon. Ashley explains that the hours are “limited as she needs a little more support.” Ashley then says she’d like her Seeking Sister Wife tribe to “step in and uplift her.” In the post, Ashley also mentioned that her godmother managed to survive leukemia and a stroke, but went into remission seven years back.

Ashey added that her godmother lost everything including her husband and her career. She used her 401k savings, stocks, and bonds to pay for her treatments. Anyway, let’s cut it short, she went to school and started the wellness center where she wants to do mud and salt baths. And, oh yeah those Seeking Sister Wife fans who might like to try it can also get Yoni Steaming.

While we can’t read the comments on the IG post, we can get a feel for how it went down from some of the Reddit community who shared a screencap of it there. Mostly they can’t get it because Ashley Snowden could easily promote her godmother’s business through her social media, rather than outright ask for donations. Others felt it strange that Dimitri’s talking about sending Ashley to Dubai, wondering why they don’t use that money to help invest in Jewel’s business? Meanwhile, others wondered if they’d stumbled across an Ashley Martson (90 Day Fiance) begging letter.

Ashey Snowden removed all her IG posts. Then she popped one up. Now, whether she took a lot of hate or is gearing up for another season of Seeking Sister Wife, we don’t know. But her latest and so far, singular post, is cryptic and relates to her birthday. Plus, comments further down, bring speculation.

In her caption, Ashley waxes spiritual about life at 33. She notes that she died many times and rose again. She adds, “But from the ashes, a Phoenix arises. My new chapter begins at 33.” She still has loads of Seeking Sister Wife fans who sent her birthday greetings and many of them asked her why she took all her pictures down. Nevertheless, no reply came. However, one person in the comments posted that people still can find her pictures if they know where to look.

Some people think Ashley just archived her old posts to start a new life. As Dimitri explains it, it’s time for her new life as she starts a third circle around the sun. That may explain the three stripes on her forehead instead of the single dot.

What do you think about Ashley Snowden asking people to send money by direct donation to her godmother? Do you think she took down all her IG posts for getting the hate on that? Or, do you think she’s just starting a new life circling around the sun? Do you know where her old pictures can be found? Sound off your thoughts in the comments below.