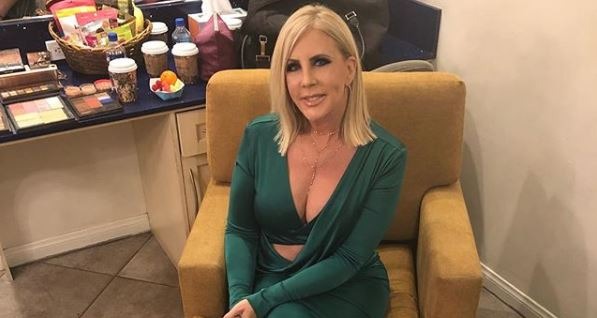 Vicki Gunvalson of The Real Housewives of Orange County shared exciting news today! There have been rumors forever that the reality star would be getting engaged soon. Today she went to her Instagram to share that she is now getting married.

Vicki shared on her social networks that she is now engaged along with a pic. In this picture, you can see her boyfriend turned fiance Steve Lodge. You can also get a glimpse of the engagement ring. So far, the reality star isn’t giving out any details. Hopefully, the cameras were rolling when it happened. This would be perfect for the next season of RHOC when it airs on Bravo.

Since Vicki and Steve have been together she has made it pretty clear she thought she found the right guy. She has even hinted about wanting a ring. It seems that she waited on Steve to ask her, though.

Vicki Gunvalson has been through a lot over the years. Her relationship with Brooks Ayers was all documented on reality television. It was a rough relationship as he lied to her about things including having cancer. It caused a lot of issues with Vicki and the girls. At first, she defended him because she didn’t think he would ever lie about something so serious.

Vicki was married to Don Gunvalson for about ten years. She made it sound a few times like she should have stayed with him. Instead, they got a divorce and Vicki moved on. Vicki was married to Michael J Wolfsmith before Don. She doesn’t mention him much at all, though. Hopefully, this wedding is the time that it works out for the reality star. The fans love seeing her happy with Steve and it would be great if their marriage goes amazing for her.

Are you happy to hear that Vicki Gunvalson of RHOC is getting married? Share your thoughts in the comments below. Don’t miss new episodes of The Real Housewives of Orange County when the show returns. An exact return date hasn’t been revealed just yet.

‘AGT’ Klek Entos: Who Is The Man In A Bizarre Mask?!
What Does Jacob Roloff Do For A Living & Does He Still Live In A Van?
Wait, Why Isn’t A New Episode Of ‘Extreme Sisters’ On?!
‘LPBW’ Tori Roloff Slammed For Insensitive Comments About Lilah
‘Bold And The Beautiful’ Joe LoCicero Is Back As Vinny Walker But How?