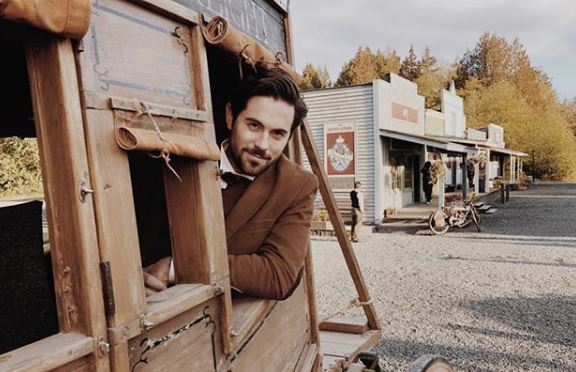 Chris McNally already made his distinctive debut on When Calls the Heart as saloon owner, Lucas Bouchard, back in March. It’s hard not to notice the striking, dark-haired 6’2” actor who comes to the Hallmark Channel’s most beloved scripted series after his sci-fi turns in Supernatural and Altered Carbon. The newcomer to Hope Valley is hardly a stranger to most When Calls the Heart fans since he already has starred in the Hallmark Channel movie favorites, The Sweetest Heart and most recently, A Winter Princess.

His character, Lucas Bouchard, has already charmed many with his affection for magic tricks. He also had a magnificent grand opening at the saloon.  He also already has an eye for Elizabeth Thornton.  Perhaps he can make that more clear after some apology.

Lucas errantly asked about Elizabeth’s husband at his opening celebration, and she quickly escaped the touchy situation.  Mr. Bouchard will have plenty of time and more than enough reason for further conversation with the cherished teacher of When Calls the Heart in making his apology.  Chris McNally also brings the right balance of swagger, self-assurance, and sensitivity to his character, who has a stash of cash in a chest and enough backbone to stand up to the Sheriff and the Mayor.  Still, he has the good sense to compromise, too.

Erin Krakow is quite comfortable in the horse stables or on horseback, as she demonstrated beautifully in her March feature for Cowboys & Indians magazine.  She also captured new co-star, Kevin McGarry, comfortably saddled on his steed in his red serge as Hope Valley’s new Mountie.

Chris McNally already is a strong advocate for rescue dogs.  The actor dotes on his two darling “pitskys” (part pit bull part husky) dogs.  On Easter weekend, Chris co-hosted Hallmark’s summer movie preview with Jen Lilley, and ended up stealing the show with his segments on pet adoption.  The new star will fit right into the When Calls the Heart cast of animal lovers.

In the stable or the shelter

While Erin Krakow is still having a great time hanging around with her When Calls the Heart co-star, Ava Grace Cooper, who plays Annie in her new Hallmark feature, Dude Ranch, with Ryan Paevey, Chris McNally has been going to the dogs.

We had a very special guest on set today! Thanks for visiting us @christian_coop1! pic.twitter.com/WWj6BFNegT

Chris McNally held handfuls of darling puppies with the Hallmark Channel’s pet adoption advocate, Larissa Wohl, during the movie preview special.  The new actor never wanted for company in his lap, either.  An older dog, Bugle, who looked part Dachshund, made it perfectly clear that he wanted to snuggle with Chris.

The new star needed no cue cards to remind viewers to “Adopt, don’t shop,” alongside Wohl.  As if fans couldn’t already find enough to love after this touching puppy love pauses, the ending credits show Chris McNally getting licks galore.

Longtime fans will remember when Jack Thornton’s faithful dog, Rip, led a behind-the-scenes tour of Hope Valley.   They may also remember that he was not so fond of Rosemary, the character. He did get along fine with Pascale Hutton, who plays her.

About to set sail

On May 18, fans can savor seeing Chris McNally as former Navy man, Tom. He is a schooner captain on Blue Island.  Romance is a sure thing for Sailing Into Love, when Claire, a biology teacher, and busy bridesmaid, enlists his help during her summer teaching project.  Choices have to be made when her old boyfriend shows up. He wants to develop the unspoiled paradise as a resort property.

Chris McNally has also completed his role as Cal in the Lifetime network’s adaptation of the VC Andrews novel, Heaven. Be sure that the kids are put to bed before tuning into this complicated, more-adult story that is set to air over the summer.

What’s better than being talented, tall, dark, handsome, and a dog lover? Chris McNally checks all the boxes.