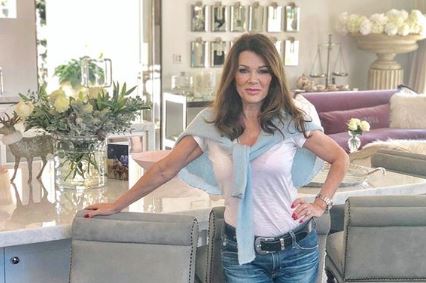 Vanderpump Rules  fans are abuzz after Raquel Leviss announced that she landed a job working for SUR, Lisa Vanderpump’s restaurant. Lisa Vanderpump’s business partner, Guillermo Zapata, first shared the news on his Instagram, writing “Welcome to SUR Family” with a picture of Leviss in front of the restaurant in the SUR uniform. Leviss made a similar post on her on Instagram on April 25th.

SURprise!!!!! You’re looking at the newest addition to SUR’s wait staff! May I take your order?

Many believe that Leviss’s new job indicates that she will have a larger role on the series going forward. Leviss seems to confirm that speculation, as the phrase “official Vanderpump Rules cast member” is now in her Instagram bio. The twenty-four-year-old pageant queen’s first appearance on the Vanderpump Rules was in season five, but has recently become a more visible presence on the show.

The news comes on the heels of Leviss’s boyfriend, James Kennedy’s, firing from SUR. The former SUR bus boy and DJ was let go by Lisa Vanderpump due to an altercation between himself and fellow cast mate, Katie Maloney-Schwartz at SUR’s gay pride event. Maloney-Schwartz then gave Vanderpump an ultimatum that either James or she would go.

Vanderpump told Kennedy that she had to “stand in defense of the women in this restaurant”. During the confrontation, Kennedy blamed his drinking for the way he acted toward Maloney-Schwartz. Over the course of the show, Kennedy has had many fights with the other cast members, specifically with Jax Taylor.

Trouble with the Cast

Reportedly, Leviss has had issues connecting with the Vanderpump Rules cast because of Kennedy’s difficult relationships with them. When speculation occurred as to whether Kennedy might return to the show, Taylor squashed all hope of his return by tweeting, “it’s been over.”

Maloney-Schwartz reported in an interview that “nobody likes him”, in regards to Kennedy, igniting theories that the reality star was sabotaging Kennedy.

Only time will tell whether the fall out from Kennedy’s firing will affect Leviss’s future with SUR.