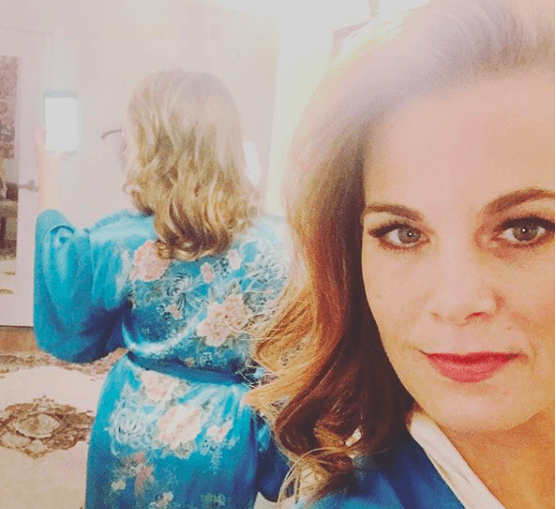 It cannot be overstated that the women of Genoa City are not shrinking violets. Time and again the men of GC wrongfully assume that is the case.  It’s often to their peril.  This week, Phyllis sends a private investigator after Kyle.  She seeks an upper hand from Jack to control Jabot and divest Fenmore’s interest in the company.  While there are plenty of reasonable ways to manage this, Phyllis does not choose those options. Instead, she hedges her bets on a scandal. One should never place their money on someone as dull as Kyle; her plan goes off course.

@howardwise you are so beautiful to work with. I love your eye ! So fun on our shoot ❤️what’s the name of this style of chair again !? ….in love with it !!! #actorslife #truthteller

For the Love of a Mother

Many viewers and bloggers have claimed that Phyllis is investigating Kyle out of love for her daughter. That is not the Phyllis any viewers know. Only weeks ago she sold out her friends and family to avoid implication in the JT Hellstrom trial.  She would sell her daughter up the river too if it benefitted business.  When her plan falls flat, Summer is ultimately the injured party.  Not to mention Phyllis could not give two figs about Kyle.  To her, he is nothing more than a dum-dum and a pawn in her scheme.

With this wholesome plan in place;  private investigator armed with a camera is sent to watch Kyle and Lola on their romantic meeting. Phyllis hopes that the heavy-lidded looks the pair give each other are enough to substantiate the idea of adultery. The only problem being, Lola is involved.  Lola and her boring morals ruin the whole thing.  She decides they cannot possibly spend the night together as Kyle is a married man. Ugh, so dull.  Or is it? After all, there is nothing wrong with looking at the merchandise; it’s a problem when touching gets involved.  Without the nookie to back up the photos, Phyllis is left without blackmail.

Throwing it back to #Skyle’s wedding day! 👰🏼 Do you think this marriage will last? #YR

With Phyllis unable to cover up her tracks or prove any wrongdoing.  She is stuck in a position of weakness with Jack.  It’s not a secret that Summer and Kyle have a sham marriage.  Jack recruits the help of Lauren, Phyllis’ would be business partner with an independent Jabot.  He might have a plan that can financially benefit all the parties involved.  This action seems too kind, especially for Jack who was the person to stage a coup in the first place.  But perhaps, as the adage goes, “the enemy of my enemy is my friend,” Phyllis is nothing compared to Ashley who has been scheming to destroy Jabot from afar.  Could a man be helpful this week? This is groundbreaking and a real cliffhanger for next week.  How will Jack bail everyone out and save Jabot once and for all?

To find out more about the scheming at Jabot watch The Young and the Restless weekdays on CBS.