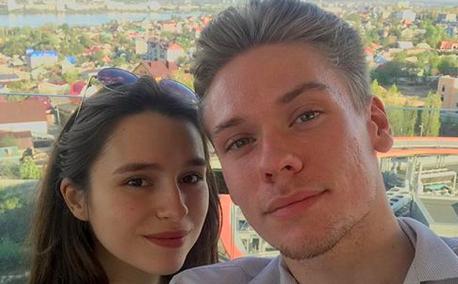 90 Day Fiancé stars Steven Frend and Olga Koshimbetova met up in Russia not too long ago. They were living there with their baby, Alex. Now, Steven has made his way to America, but he didn’t bring his fiancé and son with him.

While the family was living in Russia, we got to see all kinds of updates from them. They shared sweet pictures of themselves with their son. It’s likely that these updates will continue in the US too because they seem to like keeping up with fans.

Since Steven has decided to go to America without his fiancé and son, fans are wondering what could be going on. It seems weird because the family was planning on living in the US together. It turns out that he needed to leave early for his job. If he waited, he may not be able to keep the job. Plus, the family needs money for the big move.

At this time, Olga and Alex can’t join him yet. They are still waiting to get the plane tickets they need. Luckily, Olga’s visa has been approved so that is one less thing for them to worry about.

In an Instagram story, Steven explained the situation. He said, “ I’m in the U.S. now. Olga will be here in a week or 2. She already has her visa. Now we only need the plane tickets. P.S. I had to leave Russia without Olga early or I was going to lose my job.”

It’s a good thing that the family will be reunited so quickly. Hopefully, everything goes smoothly as Olga and Alex get their plane tickets and make their way to the US.

The 90 Day Fiancé stars living in the US

Recently, Steven took a social media hiatus. He explained that he was taking this break so that he could save up money for himself, Olga, and Alex. He knew that it would be expensive to live in the US and wanted to gather up as much money as he could. It sounds like he needed to focus on earning more money and didn’t want to be distracted by social media.

When Olga and Alex arrive, Steven will still be the only one working. This is because Olga has a K-1 visa, which doesn’t allow her to work. Steven will be providing for the family on his own without her financial assistance.

Due to the cost of living the family is expecting, this could be a challenge. This is exactly why Steven is taking things so seriously and saving up money. It also explains why he came to the US early without his fiancé. He didn’t want to risk losing his job by waiting too long.

Do you have any thoughts about the family’s big move? Let us know what you think in the comments section below!