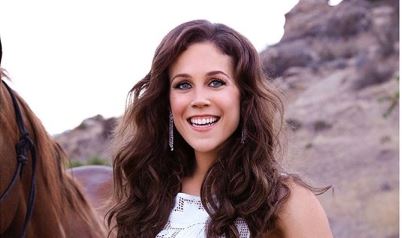 Erin Krakow portrays Elizabeth Thornton on When Calls the Heart. This show is the Hallmark Channel’s most successful scripted series, six seasons running.  Her character is ever-optimistic, ever-available, and always willing to help a friend or a stranger in the Northwest Territory community of Hope Valley. She was left a young widow but still finds happiness. Her character also finds a way to help in the community.

In real life, actress Erin Krakow has cultivated a social media presence much like her character. She is uplifting, positive, and continually displaying her sense of humor and her talents with her many followers. For a month now, however, fans have been forlorn, not just because of the absence of When Calls the Heart from their screens, but also because Erin Kraków’s effervescent humor, positive energy, and powerful images from nature have understandably been missed.

In the wake of the legal and parental crisis involving Lori Loughlin and the college admissions scandal, When Calls the Heart and the Hallmark Channel severed connections with the star,  on current and future projects. The stunning and unforeseen circumstances necessitated what the showrunners deemed as “a creative hiatus” for “retooling” that has essentially become a re-creation of Season 6 episodes that were completed months ago.

The entire cast and crew continue to be constantly encouraging, grateful, and assuring to “Hearties” regarding the impending resumption of Season 6,  but Erin Krakow kept her silence until she felt the time was right, and fans were ready.  As per Yahoo on April 8,  the talented leading lady let one of her beautiful images from nature and a few meaningful words herald her return to social media.

Straight from the heart and the script

Presenting a beautiful pink rose, fully opened in bloom, Erin Krakow captioned her image, “You are always there for me,” followed with “And I always will be.”  The affirming words were shared between Elizabeth and Loughlin’s character, the single mother, business owner, and Mayor of Hope Valley, Abigail Stanton, in the close of Season 5.

“You are always there for me” “And I always will be” 💕

Human beings are fallible and will be so forever in this earthly existence.  Elizabeth once reminded her late husband that “life is messy. People are messy,” and every person falls in the mire from time to time.  No one is condoning the decisions of the departed actress, who is rapidly facing consequences for her decisions.  What is being conveyed in loving terms is that friendship can stand through trial.   The message is also an assurance that When Calls the Heart will return.

Castmates Pascale Hutton, Jack Wagner, Andrea Brooks, and Paul Greene have taken the time to give sincere gratitude to the When Calls the Heart following, promising that the cast’s hard work during the hiatus means more of Season 6.

A friend in need

Lori Loughlin and her fashion designer husband, Massimo Giannuli, are learning hard lessons. They will find out who their true friends are now.

It started out as charges of bribery, misrepresentation, and felony mail fraud. Now the couple is facing more following the revelation of paying $500,000 in the Varsity Blues scandal. News sources shared today that additional charges of money laundering will be brought against the pair and 16 other participants. It is predicted that Loughlin will serve jail time. Of course, this is going to be hard on her.

Facing consequences and learning about true contrition is something that both Elizabeth Thornton and Abigail Stanton could understand and appreciate.  At least Loughlin will learn the treasure of a real friend in the process.

Hopefully, When Calls the Heart will return to Hallmark soon. For now, viewers just have to wait and see.