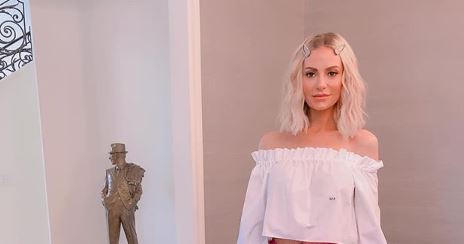 This week on Real Housewives of Beverly Hills, the ladies met for lunch, sans Lisa Vanderpump. The topic of discussion was whether Lisa could have leaked the Puppygate story to Radar Online. During the time of filming, the Bravo viewers hadn’t yet heard about the situation with Vanderpump rescue dog Lucy Lucy Apple Juicy.

This season on RHOBH, Dorit has found herself at the center of the Puppygate storm. Dorit adopted Lucy from Vanderpump dogs. She claims the dog bit her daughter and husband, so she rehomed it. According to Dorit, the person she gave the dog to was the one who abandoned the dog at an L.A. kill shelter, not her. Regardless, her contract with Vanderpump dogs stipulated that the dog is returned directly to the rescue. She disregarded that and here we are.

If you’ve watched even an episode of the show, you know Lisa Vanderpump is a HUGE dog lover. Her reaction to Dorit giving the dog up was very low-key. Lisa is also in mourning for her brother, so her behavior this season has been odd overall. However, in a new interview with Reality Blurb, Dorit says she believes Lisa did leak the story to punish her for what happened to Lucy. Because of this, you know Lisa is going to be upset once again.

Having dinner with my priest 😍🙌🏻 #FatherGreg

To explain why she thinks Lisa was behind the Radar Online story, Dorit said, “I think certain people are crafty and they get whatever message they want out there.” She went on to say, “You have to look at the article and see who it benefits. And then you know, put two and two together and say, ‘Well who could it be? I dunno.’”

According to Dorit Kemsley, the smoking gun was the wording of the article and the specific details published in the article. Dorit explains, “There were things in that article that only her or her team knew. Like the dog was re-homed, the dog was a chihuahua mix. I mean, these are things that only a handful of us knew – me, and her team, and the staff. Who else is going to do it?”

Dorit and Lisa had been close friends up until this dog situation. Lisa has lost a lot of friends and support from the other RHOBH ladies. Vanderpump seems open to mending her relationship with her co-stars, but former friends Dorit and Kyle Richards seem less willing at the moment.

During the interview, Dorit Kemsley claims that Lisa is treated differently by Bravo than the other stars of the show. Dorit speculated, “Let’s think about it, if it was anybody else doing some of the things, you know, would they get off that easy?” Dorit’s not entirely wrong about this, honestly. None of the other ladies have one spin-off and two other potential spin-offs in the works. Actually, co-star Lisa Rinna suspects one of the spin-offs surrounding Vanderpump dogs is the reason why Lisa V. perpetrated the Puppygate drama.

After Lisa V. reads Dorit’s interview, she might reconsider trying to patch up their friendship. Dorit does expect to return for Season 10 if she’s asked. Because of the drama, this could make for a really interesting season of the show.