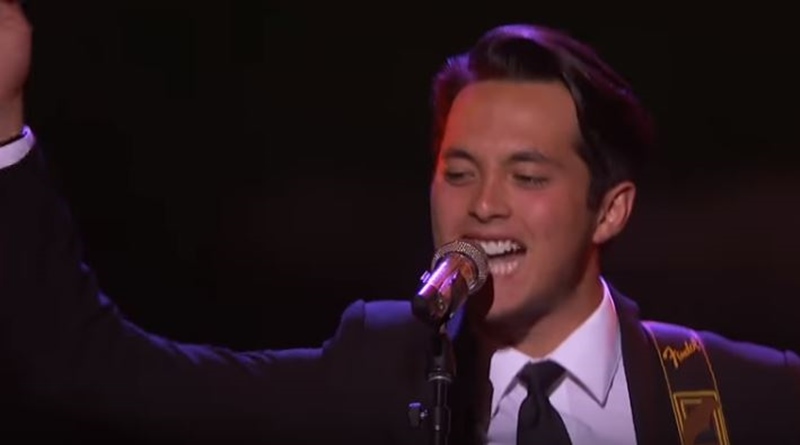 American Idol fans, hold onto your hats because Laine Hardy killed it with hair-raising talent during his “party with a Hardy” performance. For Laine, who got sent home at the same stage last year, there must have been some nerves, but you wouldn’t know it.  Completely out of character, he came out with a Beatles number and just took it away.

American Idol judges – ‘We made a monster’

Judges occasionally say some dumb things in American Idol, but this time it looks like they nailed it. Laine Hardy walked out onto the stage wearing a black suit, with neatly slicked hair, carrying an electric guitar.  Katy Perry pulled a face, and Lionel Richie got to his feet yelling “no way!” Meanwhile, Laine stood there looking like a boy on his way to Sunday School. Then it came – “Ya’ll ready to party with a Hardy?” And, the crowd loved it!

Luke Bryan and Katy were like, ‘haha, lame,’ but then Laine started to play the guitar and swept everyone away with “Come Together” by The Beatles. Fans also got a treat because Laine rocks the electric guitar. How do you know when you just saw something special happen? I guess it must be the goosebumps running up your arms, and the prickle of moister in the corner of your eye. Now, that is real talent and American Idol seemed to have made the right choice by bringing him back this year. As Laine ran off the stage, Katy Perry said, “We have made a monster!”

You can watch Laine in the video below. His performance starts at 1.37.

Laine Hardy killed it with his #partywithahardy hashtag

Twitter erupted, as Laine previously asked them what his fan-following should be named. The #hardyparty won out, but now, since his Beatles performance, it’s the #partywithahardy that took over. Fans grew nervous as contestant after contestant performed before he came out as a tail-ender. But when he did, he totally killed it and got through to the Top 20. Even Idol winner Maddie Poppe stepped up to congratulate him:

I did NOT see that coming. GREAT JOB @TheLaineHardy that was soooo good. #americanidol

Luke Bryan said on Twitter that he “agreed with Katy Perry” that “we’ve made a monster.” He added that he thought Laine looked like “the whole package.” Meanwhile, American Idol‘s Lionel Richie tweeted, “Who is this guy in a suit, and what have you done with our @thelainehardy?” Actually, he’s got a point. What happened to our shy country singer from Louisiana?

A Beatles number by Laine got spoiled for the top 20

Ahead of the concert, the fact that Laine planned on singing a Beatles number was one spoiler from the Idol Pad that got us head-scratching. As TV Shows Ace wrote on March 29, “Who could imagine a country boy like Laine Hardy trying out with a Beatles song by an old pop band?” Well, now you don’t need to imagine anymore. Just flip back up and watch the video again.

What do you think about Laine Hardy killing at the American Idol Showcase round with his Beatles number? Did you wish you could “party with a Hardy?” Sound off your thoughts in the comments below.