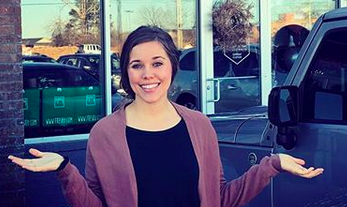 On Saturday, Jessa Duggar Seewald posted a picture of her newly decorated master bedroom. Earlier in the week, she shared an update about their living room, which she redecorated on her own one day. It seems like she’s definitely in the groove and keeps decorating even more.

Since she’s expecting her third child soon, she is probably nesting. This combined with it being springtime gives her plenty of reasons to freshen up her home. So far, it looks like she’s doing a great job. Fans are impressed that she’s been doing this on her own with the two boys at home. Plus, she’s due to have her baby in just a few months.

In the first post, she mentioned that she is going for a minimalist look. To achieve this look in her master bedroom and living room, she has gotten rid of some of their bulkier furniture. Selling these items on Facebook Marketplace has given her more money to put toward the renovations.

What has Jessa Duggar Seewald done to her master bedroom?

Now that Jessa Duggar Seewald her redecorated her master bedroom, we have another space to admire in the Seewald home. In her updates about decorating her home, she has been very thorough and shares tips with fans. They seem to appreciate this!

In the post, she says that she used the same paint she did in the living room. She repainted the changing table and added new bar pulls. She hung up a photo of herself and Ben Seewald and a sketch that was done on their honeymoon. Because the bed frame was so bulky, she sold it. Now, their box spring and mattress are on the floor.

She explains why she loves the new bed situation and says, “I realize this isn’t for everyone, but we do have a tall mattress and, with the box spring, our bed sits at about couch height. I LOVE IT. (Can we just pause for a moment and celebrate the fact that there’s no more dusting/cleaning/swiping toys, socks and other random items out from under the bed?! Yay!!!)”

How have fans reacted to this renovation?

Most of the response on her home decorating posts has been positive. Fans are loving the new style and can’t wait to see more! A few of her fans offered suggestions. Others wanted to know where she bought her new items.

When she shared pictures of her master bedroom, some fans were concerned about a mirror not being tethered to the wall. Another fan mentioned that the rug wasn’t quite minimalist. Some said she shouldn’t have her mattress on the floor.

Knowing Jessa Duggar Seewald, she isn’t bothered by these comments and will keep doing her own thing! Plus, she’s happy with these renovations and that’s all that matters. At the end of her post, she says that she is, “Loving the simplicity of our new master bedroom!”

What do you think of Jessa Duggar Seewald’s home? What do you hope to see her tackle next? Don’t miss more Duggar updates from TV Shows Ace!