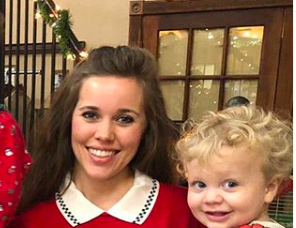 We have seen Jana Duggar’s interior design and decorating on Counting On and on social media. It turns out that another Duggar has some home renovation skills as well. Recently, Jessa Duggar Seewald posted on Instagram about redecorating her living room.

On Instagram, she shows off the newly decorated living room. In the caption, she says that this renovation was done on a whim. She explains,

“Decided on a whim that I wanted to become more of a minimalist, and the first thing I wanted to do was to repaint our living room a lighter color— Revere Pewter. It was 7pm, and Ben was going to be in a meeting for the next few hours, so I loaded up the boys and headed to Lowe’s.”

Here’s a little glimpse into a Seewald home project that was completed recently. ☺️ Decided on a whim that I wanted to become more of a minimalist, and the first thing I wanted to do was to repaint our living room a lighter color— Revere Pewter. It was 7pm, and Ben was going to be in a meeting for the next few hours, so I loaded up the boys and headed to Lowe’s. Spent $60 on a quality one-coat gallon of paint, tape, a roller, pan and brush— came home and got to work. 😄 Ben was pleasantly surprised when he walked in the door. 😂 . Finished painting at 1am (fear not, windows were open and it was well ventilated 😆)— and then I started thinking about how we could sell off some of our bulkier items in our living room, such as the coffee table and end tables. Decided to try out fb marketplace for the first time, and they sold in a matter of minutes! With the money made, it gave me a budget to be able to buy a new rug from Amazon and a couple of plants from Hobby Lobby (when they were 1/2 off, of course)! Also found some adorable throw pillows for $4 each at a second hand store. . Of course the kiddos corner isn’t quite minimalist. Probably need to sort through and donate a few things. 😊 The slide will be staying even though it’s not “on theme”. Lol! I was driving down the road and saw a lady dragging it to the curb, so I pulled over immediately and she said I could have it! It was definitely God-sent bc I had recently been looking at similar, sturdy options online, but wasn’t ready to spend $100+ on something like that! Such a blessing. The boys play on it all the time, and it’s great when the weather is rainy or bad as a way for them to get their energy out indoors. (Got this idea from my mom, as we had a similar slide in our living room growing up. 😉) . It may not be HGTV worthy, but it’s the hub of our home and we feel like it’s a massive transformation! 😁💞 Loving the lighter colors and having less in the room— and the fact that, by selling some things, we weren’t out a penny and actually made some cash! It definitely makes this little the area feel a lot bigger!! And it’s been wonderful having more floor space for the kids to wrestle and built things. ☺️

It sounds like Jessa Duggar Seewald made all of these renovations without breaking the bank. She shares, “and the fact that, by selling some things, we weren’t out a penny and actually made some cash!” She sold a few items on Facebook Marketplace and was able to make some money on those. Next, she went shopping at Hobby Lobby and got a good deal on some plants. Then, she ordered a new rug on Amazon and found a few throw pillows at a secondhand shop.

We love the new look of her living room! It looks very clean and bright. She did a great job!

What are fans saying about the Counting On star’s home?

Fans are leaving lots of nice comments about Jessa Duggar Seewald’s decision to renovate her home. They really like the pieces she decided to use and her paint color choice.

Here’s what fans are saying about the decorating she’s been up to:

In addition to these compliments, fans asked her for some decorating advice and wanted to know where all of her pieces were from. Jessa Duggar Seewald is pretty interactive with her fans and gave them the answers they were looking for.

Though we haven’t seen a nursery for the newest Duggar Seewald baby, we’re sure it’s coming. If Jessa Duggar Seewald is nesting, that would explain why she’s doing all this decorating. Plus, it’s time for spring cleaning anyway. With this in mind, there’s a chance we will see more decorating from her in the future.

What do you think of Jessa Duggar Seewald’s home renovation? Which room do you think she will tackle next? Check TV Shows Ace for more Duggar family updates!