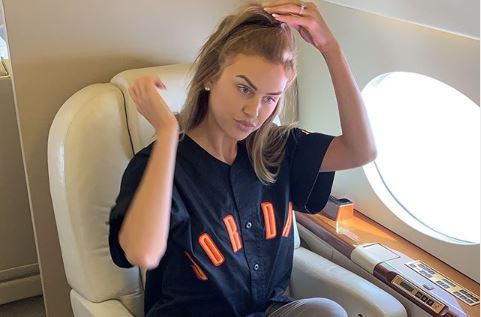 There has been a lot of speculation that Lala Kent might want to leave Vanderpump Rules. The reality star is on the show, but her fiance Randall Emmett doesn’t want any part of the show. Lala actually talked to Reality Blurb and shared if it is true that she might leave the show.

So is Lala Kent moving on from Vanderpump Rules? One good reason for her to leave would be to work on her sobriety. Lala wants to stay sober, but that is hard when surrounded by alcohol at all times. While attending the Gasparilla International Film Festival in Tampa, Florida on March 21 with her fiance Lala shared what her future plans are for the show.

Lala did share that her fiance Randall’s two daughters will always be off-limits for the television series. She enjoys having some of her life private. Kent said that as of right now she doesn’t have any plans to leave the show. She also made it clear that Randall isn’t trying to convince her to quit either.

She went on to say, “Randall would never in his life ever tell me I have to do something. He is so supportive and I don’t know where that came from that I was going to leave the show. I’ve never said that. No, no. Vanderpump Rules is the mothership. I’m staying on the mothership.” It looks like she will be around for a while.

Lala is working on marriage plans and this big day will be happening soon. They don’t have a date, but they do have a wedding planner. Lala also hopes to have children with Randall in the next couple of years. When she makes those changes in her life, who knows what she will decide or if Vanderpump Rules will even still be around.

Are you surprised to hear that Lala Kent doesn’t have plans to leave the show? Share your thoughts in the comments section below. Don’t miss the new episodes of Vanderpump Rules on Monday nights on Bravo.