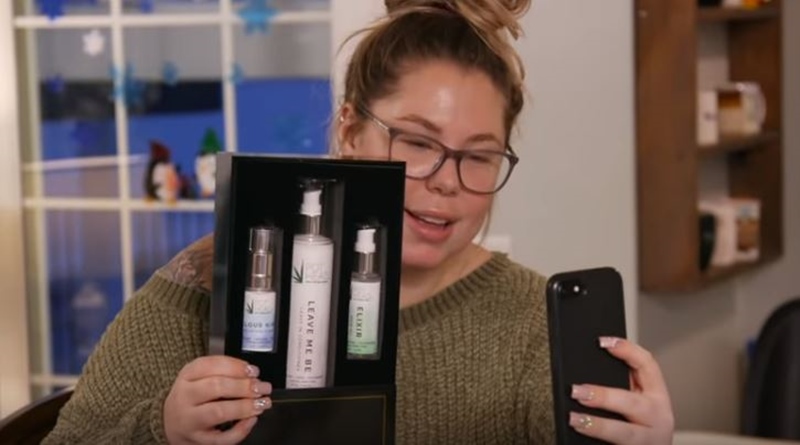 Teen Mom 2 fans saw back in December that Jenelle Evans set fire to Kailyn’s “peace gathering” gift. Of course, it happened a while back but the current show only just aired that segment, so fans got a chance to revisit it. Over on Twitter, fans discussed how perplexing Jenelle was. In fact, Kail actually sent the boxes of Pothead hair products to all of her cast and team members as well.

During the show, Kailyn quite often chats to her Teen Mom 2 fans and this time, she said she never watched the segment. Well, probably, she had no need to do so. Like her fans, she already saw Jenelle publically burn the boxes on social media. Back then, E! News reported, “Evans douses the gift and the ground near it in gasoline and sets them on fire using a blowtorch. “Hey Kail, she says. “This is to your peace offering.”

According to Kailyn on Twitter, she had already reached out to Jenelle not only in texts but on Twitter as well, to no avail. Actually, between the two of them, there’s been bad feeling drama almost from the get-go. For fans of the Teen Mom 2 MTV show, the rift also divides them. So, Kail’s faithful followers come out to defend her when they can. Obviously, the same goes for Jenelle’s fans.

Kailyn’s fans, now they’ve seen the MTV episode, now wonder why Jenelle kept calling it a “peace-gathering gift.” Clearly, to them, she’s missing the whole point. After all, if Kailyn never included her in the gift-giving, no doubt drama would arise. If, as happened, Kailyn did send her the gift, the drama would arise. From Kailyn’s camp, Jenelle would have created a drama irrespective.

Here’s what some Teen Mom 2 fans said about it on Twitter:

********** NEGATIVE REVIEW *******. . . Been debating whether to upload this, but I feel like the time is appropriate. Kail Lowry , for years you’ve been super jealous and envious of all us girls on the show. You try to make your way into the group, then turn into a mean ass person when it came down to me. You apologize on/off, claim I need to be apologizing sometimes, then talk shit constantly about me and my husband to the tabloids?! THEN you had the balls to send me a PEACE GATHERING GIFT?! Don’t send me gifts and then go talk shit AGAIN!!! Wow, you’re an idiot cuz this is what I do for gifts sent from fake ass bitches like you. 🤷🏻‍♀️🖕🏼 Stay our of my life, go worry about your own. . . . . 🎶 by: @ryanupchurch 🎸 by: @thetravistidwell

As you can see from the Instagram above, Jenelle definitely took it as a peace gift. She captioned it with lots of anger about Kailyn and called it a “PEACE GATHERING GIFT.” Hmm, those caps seem about to jump right out the internet into Kailyn’s face.  As far as Kailyn’s followers go, a good summing up was this tweet: “Kail, we all saw it here as it happened and watched her light a friendly gesture from you on fire. Jenelle lies endlessly especially now that’s she’s with David and would do anything to cover for her as was seen during the 911 incident. We know you’re telling the truth here.”

Nevertheless, in favor of Jenelle, MTV did actually slant it all as a peace offering. What do you think about Jenelle Evans making such a drama over Kailyn Lowry’s so-called ‘peace gift?’ Do you think either way she would have found a way to create drama? Have your say in the comments below.