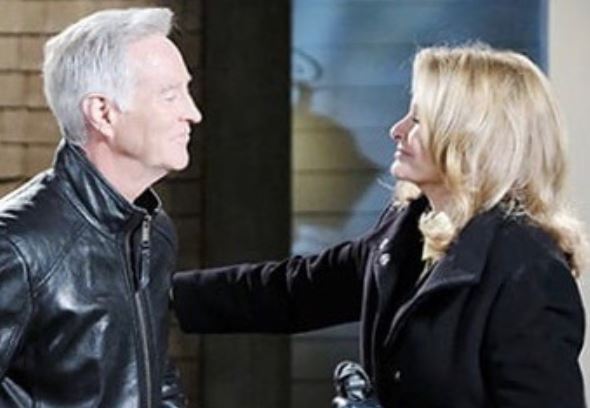 Just as the real world welcomes in Spring, things in fictional Salem are also heating up. This week on Days of our Lives, John (Drake Hogestyn) might be onto Diana’s (Judith Chapman) role in the attack on Marlena (Deidre Hall.) Diana’s fingerprints were found on Marlena’s IV bag. Will she be able to talk her way out of it when John turns the tables on her?

Marlena won’t be the only one in the family in the hospital. Her grandson Will (Chandler Massey) collapses and is rushed to the hospital. How will Sonny (Freddy Smith) react to Will’s hospitalization? How will Leo (Greg Rikaart) use this to keep the lovers apart?

Things have been strained between newlyweds Hope (Kristian Alfonso) and Rafe (Galen Gering) since Ted (Gilles Marini) came back to town. Rafe is determined to dig up dirt on the crooked lawyer. So determined, Rafe gets reprimanded by Abe (James Reynolds.)

Jordan (Chrishell Stause Hartley) reveals shocking information about Ted to Rafe that might help him take down his nemesis. Does Jordan know about Ted and Hope’s illicit kiss? Is there any hope for Rafe and Hope’s marriage?

As viewers know, Tripp (Lucas Adams) plans to marry Haley (This Megia) to help her get a green card. Viewers also know that Claire (Olivia Rose Keegan) is crazy about Tripp and just plain cray-cray. Unfortunately for Tripp, he doesn’t know this. He confides in Claire that his marriage to Haley is fake.

Claire records the conversation and takes it to Eve. Both of Salem’s resident bad girls want Haley deported. What will they do with the recording?

Stefan Locks Lips.. But Not With Chloe

Will Stefan and Gabi turn their hate for each other into love? Is Brady still in love with Chloe? Tune in to find out which couple grows closer and which couple falls apart.

Brady didn’t take too kindly to his brother Eric stealing someone else’s woman again. (Eric “stole” Nicole (Arianne Zucker) from Brady and the brothers have fought ever since.) Brady threatens to tell Rex about the kiss, but Sarah beats him to the punch.

Sarah confesses to Rex before Brady can. Will Rex be as forgiving as Sarah was when he cheated on her? Viewers will have to wait and see.

Watch Days of Our Lives weekdays on NBC to keep up with all the drama in Salem.