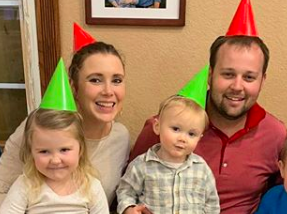 Anna Duggar recently told fans about the fitness challenge she is participating in this year. Each month, she has a goal to walk 50 miles. She seems to be doing well with this and provided fans with an update at the end of February about her progress.

Several of our friends made New Year’s resolutions for fitness, started some kind of diet and decided to try to make some changes in the new year! I used the “busy mom” excuse. While I made a noble goal of reading through my Bible this year, I thought I would skip the fitness goals. 😅 However, seeing the progress of my family & friends has inspired me to join in making a physical change for 2019! So… for the month of February I’m challenging myself to walk 50 miles. 2 or 3 miles a day will reach the goal with a few extra days to rest. ( Yes, I know you marathon runners can do this in like 2 days 🙌🏻) The reason for sharing this is 1. The accountability will motivate me to keep going and not to quit! 2. I want to invite y’all to join with me!!! Just use #February50 so we can keep up with each other! #youcandoit #February50

At the end of February, she also posted on Instagram and said, “Now on to March – hoping to go another 50 miles!” Though she has yet to provide an update about her progress in March, we’re assuming she’s chipping away at her goal.

Because she is keeping fans up-to-date via Instagram, she has been receiving different comments from them. Some of these comments include guesses as to why she’s getting into shape. Other comments focus on her amazing progress so far and are very encouraging!

Why do fans think Anna Duggar is getting fit?

Some fans have begun to speculate about why Anna Duggar is walking 50 miles per month. They think it is somewhat weird or suspicious that she is doing this all of a sudden.

They have started to think that she might be getting into shape before she divorces her husband, Josh Duggar. Previously, Josh Duggar has gotten caught having an affair. Several years after he and Anna Duggar got married, it was revealed that he molested his sisters years ago.

As of right now, Anna Duggar has decided to stay with Josh Duggar despite everything that has happened. For years, divorce rumors have been circulating about these two in particular though. Anna Duggar has never confirmed nor denied anything.

Something that makes this even more complicated is the Duggar family’s values and their ideas about divorce. Divorce is frowned upon among the Duggars, which would make getting a divorce difficult if Anna Duggar wanted to go that route.

Of course, it’s possible that she is just trying to lose weight and live a healthier lifestyle. This is a good idea since she has five young kids to be a role model to. She probably wants to show them the importance of exercise and healthy food.

What are fans saying about Anna Duggar’s transformation?

Since Anna Duggar has only been working out for a couple of months now, she hasn’t undergone a complete transformation. Still, fans have been able to pick up on changes.

Many fans have been complimenting Anna Duggar on how good she looks. Whenever she posts a picture of herself, fans are amazed at the changes they can see. they say that she is glowing and that she looks healthier already.

In addition to complimenting her, fans have been very encouraging. Some have even joined in and have begun working toward walking 50 miles per month too. It looks like Anna Duggar is using her influence for good!

Some fans have already said that she looks unrecognizable. This is after just a couple of months of working out so it will be interesting to see the changes if she keeps things up a year from now.

Why do you think that Anna Duggar is working out? Do you have any ideas? Share your thoughts in the comments below!

Don’t miss Counting On on TLC on Mondays at 9/8c!