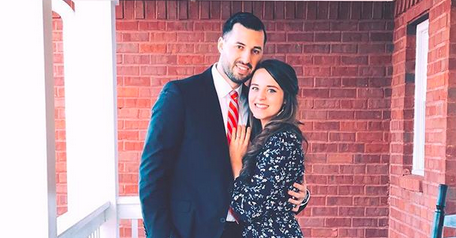 Recently, Jinger Duggar and Jeremy Vuolo took their family of three on a trip to California. The two parents documented the vacation via social media.

Are we to anticipate the arrival of a 🐼 in all this bamboo?! @thehuntingtonlibrary

It looks like they enjoyed their time out west. They visited the Huntington Library and Botanical Gardens and the Getty Center. They also shared photos of their delicious food and unique coffee spots.

Of course, we got to see pictures of Felicity Vuolo traveling too. It looks like she did great! Fans always soak up any big news about the eight-month-old.

In the comments, fans began to tell the Vuolos to move to California. These comments said things like, “Move to LA already!!” and “I have an inkling you, Jinger and Felicity will be moving to LA”.

Though this is purely speculation, there are a couple of reasons that the Vuolos will be moving to California in the future.

Jinger Duggar and her family love it there

This isn’t the only reason that the family may be moving to Los Angeles or another part of California. It’s definitely worth mentioning it though. During the week-long trip, the family truly seemed to enjoy themselves.

That isn’t to say that they don’t like living in Laredo, Texas. They just appear to be very comfortable in Los Angeles based on their pictures. They seem to fit in there. If they like it enough, it may warrant a move.

Jeremy Vuolo posted last year saying that he was accepted into The Master’s Seminary. As expected, his intentions were to study theological and pastoral studies. He never came out and said if he was officially attending the seminary.

The school has a three-year degree, which includes one year of online schooling and two years of on-campus schooling. There are eight different locations that Jeremy Vuolo can choose from. The one nearest to him, which is in Dallas, Texas, would still be quite a drive.

As of right now, the couple hasn’t come out and said anything about whether they will be moving. They haven’t responded to fans’ comments on the topic. We will wait and see if they announce a move in the coming months!

Do you think that Jeremy Vuolo and Jinger Duggar Vuolo will be making this big move anytime soon? Let us know your thoughts in the comments below!

Don’t miss the Duggars on Counting On on Mondays on TLC at 9/8c!

Amy King Wishes To Save Abused Children After Cousin Josh Duggar’s Arrest
‘RHONY’ Season 13 Reunion Canceled: What Does This Mean For The Show?
Nanny Faye Has Chase Chrisley Blushing With The Junk In Her Trunk
‘BIP’ Brendan Morais Responds To Alleged NordicTrack Firing
‘Below Deck Med’: What Made Lexi Wilson Fire Back At Producers?