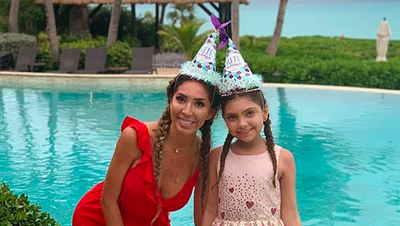 During her days on 16 & Pregnant, Farrah Abraham became the mom of her daughter Sophia. Then, she made her way to Teen Mom OG. Now, fans are questioning whether she will be adding to her family anytime soon. On February 23, Sophia celebrated her 10th birthday.

HAPPY BIRTHDAY TO YOU @sophialabraham HAPPY BIRTHDAY MY TWEEN HAPPY 10Th Birthday! Beautiful, smart, lovable Sophia Laurent Abraham! Love you and so thankful & grateful to have the best Daughter ever! 🎂🎂🎂🎂🎂🎂🎂🎂🎂🎂

Since everyone has been asking, Farrah Abraham is speaking out about the possibility of growing her family.

Recently, she spoke to Hollywood Life about having another child and said, “It just doesn’t seem plausible right now. I don’t know!”

In the interview, she explained, “I’m open to adoption. I feel again like I don’t want to necessarily go backward if it feels backwards.” We think she means that she doesn’t want to start over with a newborn and be in a seriously committed relationship right now.

She seems to be considering adoption. She mentioned that one of her friends is in the process of adopting, which Farrah Abraham says she may be interested in as well. Many kids in her neighborhood were adopted too so she has been familiar with adoption since she was young.

From what Farrah Abraham has shared, it seems like she will not be having another child too soon. She is waiting for the right time. We wouldn’t be surprised to see if she announces an adoption or a pregnancy in the future though!

Is Farrah Abraham currently dating anyone?

Perhaps Farrah Abraham is considering adoption because she doesn’t want to get into a serious relationship. She may not want to settle down and commit to anyone right now.

At this time, Farrah Abraham isn’t in a relationship. She has said that she is not opposed to dating in the future.

In the past, she has had boyfriends. After one of her recent relationships ended, she mentioned how she wants to focus on being the best parent to Sophia. That’s her top priority so she is putting it above dating. It seems like raising her daughter is very important to her. She looks to be doing a great job so far!

Sophia’s dad has not been in the picture for 10 years. Her father, Derek Underwood, passed away in a car accident 10 years ago. This loss had a big impact on Farrah Abraham’s life and may also have an effect on her relationship status today.

Even if she chooses not to get into a relationship, there are plenty of ways for her to add to her family. This lack of a relationship doesn’t have to stop her from giving Sophia a sibling if she would like to.

So, do you think that this Teen Mom OG star is actually going to adopt a child? Share your thoughts in the comments below!

Be sure to check back for more reality TV show updates from TV Shows Ace!